You’re fresh out of your parents’ home and living in student accommodation. You may have depended on your parents for some (or most) of the chores, but now living independently can feel like a chore itself. But, how bad are Britain’s student hygiene habits?

We surveyed young adults in the UK to uncover their hygiene secrets. We’ve enlisted the help of Dr Deborah Lee at Dr Fox Online Pharmacy to reveal how dirty the findings are below. 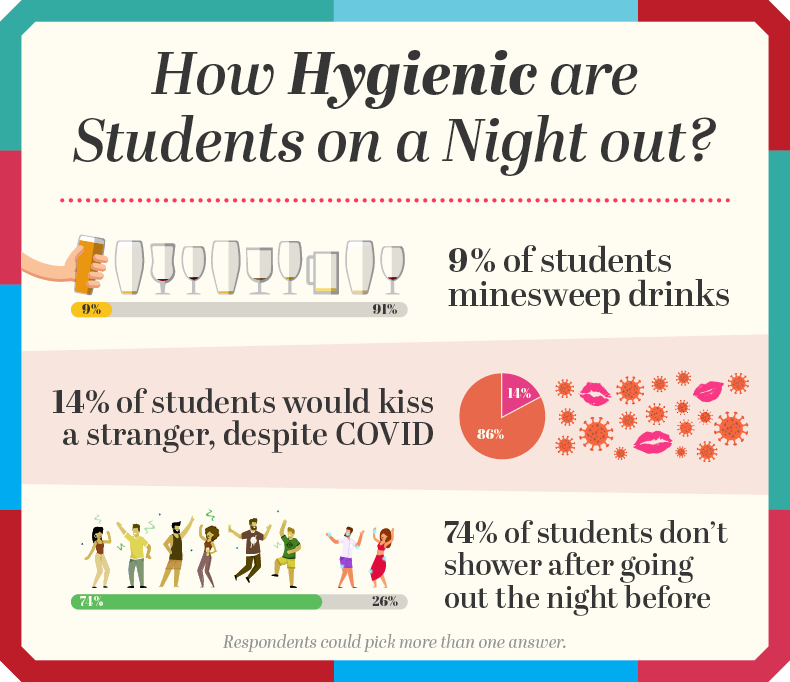 Nearly 1 in 10 Students Would Minesweep Drinks, Putting them at Risk of Warts and Boils

If COVID has taught us anything, it’s how easy infections can spread. Despite this, almost 1 in 10 (9%) of students admitted to ‘minesweeping’ drinks. If you’re unfamiliar with the act of ‘minesweeping’, this involves taking and drinking unguarded drinks in a bar.

However, this could be putting students at risk of a plethora of infections. Dr Deborah Lee, from Dr Fox Online Pharmacy says students should think twice before minesweeping, “because huge numbers of bacteria and viruses live in the mouth, in the pharynx, and saliva. Any of these can be easily transmitted from one person to another, from saliva on the rim of a glass or a drinking straw.”

Dr Deborah Lee adds that the number of bacteria that can be transmitted in saliva is countless, such as HPV that can cause mouth warts, staphylococcus that causes boils and abscesses, and streptococcus pyogenes (strep throat) to name a few.

Almost 1 in 6 Students Would Kiss a Stranger, Despite COVID

Tap Warehouse discovered that 14% of students would kiss a stranger. However, this could be putting students at risk of COVID as the virus spreads through respiratory droplets that can be inhaled or land in the mouth.

Not to mention you could be exposing yourself to cold sores and glandular fever. According to Dr Deborah Lee, “factors that increase the likelihood of becoming infected through kissing include poor dental health, a current but perhaps unrecognised cold sore (herpes infection), or recent oral sex.”

She adds, “many people harbour bacteria and viruses in their mouths but feel well and have no idea they carry these organisms.”

However, it’s not all doom and gloom. Kissing has many benefits, such as reducing stress by releasing calming brain chemicals that soothe the mind, which could be the perfect remedy for those stressed out about university deadlines.

74% of Students Don’t Shower After Going out the Night Before, Leaving Sweat and Bacteria to Fester

Surprisingly, a huge 74% of students admitted to not showering after a night out. But, did you know that sweat only begins to smell after we leave it on our skin and it interacts with our bodies natural flora? So, if you don’t want to be smelling of last night’s sweat or booze, it’s recommended to shower after or the next morning.

Not only that, not showering after going to a club could leave you exposed to infection. Dr Deborah Lee states, “sweat, saliva, food and drink debris, dirt, pollutants and any other contaminants on the body, then transferred to your clothes, could provide a focus of infection.

76% of Student Bathrooms Could be a Breeding Ground of Bacteria

76% of students surveyed confessed to not managing to clean the bathroom at least once a week, which could be a problem.

According to Dr Deborah Lee, “toilets are a major source of infection outbreaks. Many studies have linked infected toilets and shared bathrooms to outbreaks of infections such as norovirus, hepatitis A, shigella and salmonella.

“Infected vomit and faeces contain trillions of bacteria and viruses, all of which can live for prolonged periods in the toilet bowl and can create a biofilm providing a reservoir of infection.

“Flushing the toilet can lead to a plume of infectious organisms settling on taps and in washbasins.”

To avoid the bathroom being riddled with bacteria and viruses, bleach should be used to clean the toilet, and ensure you clean the bathroom at least once a week.

Interestingly, our survey revealed that 71% of students don’t wash their laundry regularly. However, a whopping 74% of students also admitted to not showering after a night out, meaning students are sleeping amongst sweat and germs from a night out. Germs love warm and moist environments – like your bed.

As the temperature increases, the bed will become a breeding ground for any germs on your body from a night out, which could be a problem if you don’t wash bed linen often.

It’s recommended to wash most clothes after 2-3 wears, except for underwear and workout clothes which should be washed after each use.

Whilst students may have some unhygienic habits, they’re not alone in their unclean ways. Our research has found that adults can be particularly unsanitary in the gym and kitchen. However, if you feel like going on a cleaning spree after reading this, why not check out our guide on how to clean a shower head?

The flapper is found in your toilet cistern. It opens to let water flow into your toilet bowl, then seals it off when the flush has finished.

On an average day you’ll find Dominic leafing through a menagerie of interior design reads, forever in a life-long search for the latest and greatest trends. He looks after our CGI designs here at Tap Warehouse, often intertwining some of his favourite interiors with our newest products. Ask him on any day his favourite colour and you’ll likely get an answer ranging from burnt orange to a deep, stormy teal. Dominic might not be the strongest DIY-er in the team, but with a family background in the bathroom industry he’s gleamed a raft of knowledge over the years… most of which he can actually remember. In his spare time you can usually find him musing through a good book, whipping up a fresh brunch or lounging in a sunny pub garden.