This guide will outline the best ways to clean your shower head to keep it working and looking great! If your shower head is covered in limescale or the water is no longer coming out straight, chances are you need to give it a clean.

How To Clean A Shower Head With Vinegar

White vinegar can be used to clean many areas around the home, including your shower glass. Here's how to clean your shower head easily using just vinegar: 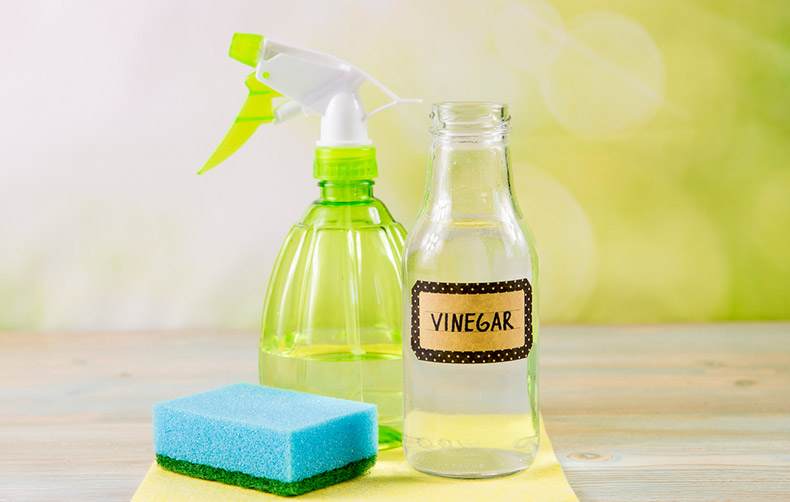 The first step you need to take when cleaning a shower head is to remove as much of the surface dirt or limescale as you can. To do this, grab your toothbrush or scouring brush and scrub the surface of the shower head.

2. Fill a Plastic Bag With Vinegar

Now you’ve removed all the surface dirt, you can prepare to soak the shower head. Take a plastic bag (sandwich bags are a good choice) and fill it with white vinegar. You’ll need to fill the bag up enough so the shower head can be completely submerged.

3. Place The Bag Over The Shower Head

Once you’ve filled it up with vinegar, place your plastic bag over the shower head, making sure it’s completely submerged in the vinegar.

You’ll now need to leave the shower head to soak in the vinegar for at least an hour. Increase the amount of soaking time if your shower head is heavily soiled.

5. Remove From The Bag

Once you’ve allowed your shower head to soak, take it out of the bag and run it under some hot water. This will help clear any extra deposits, so pay particular attention to clearing out the nozzles.

Now you’ve had a chance to soak the shower head, you can try scrubbing it to remove more dirt and limescale. Pay close attention again to the area around the nozzles which will often harbour a lot of limescale.

Once you’ve scrubbed the shower head to remove the last of the dirt, run it under some water again to remove any remaining deposits and the vinegar smell.

Lastly. Give the outside of your shower head a wipe with a sponge. This combined with the vinegar should give it a nice shine.

How To Clean a Fixed Shower Head

With a large majority of fixed shower heads, you can still unscrew the head itself and use with method above. If this isn't possible with your shower head, you can use the method below. 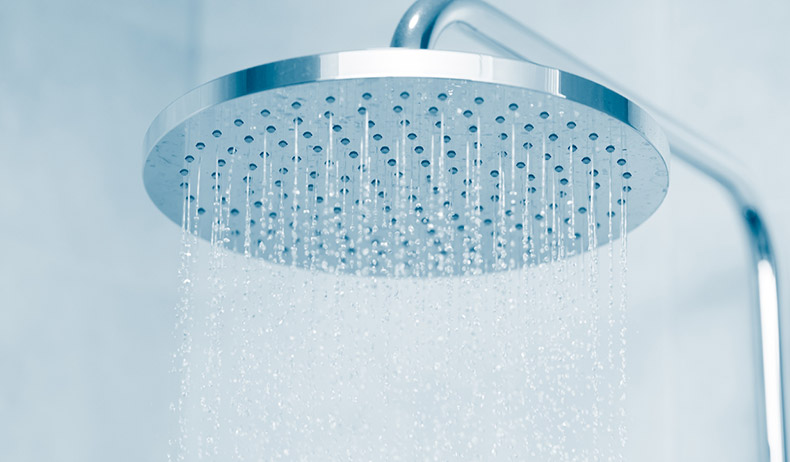 As before, you’ll need to first take a sponge or scourer and try and remove all the surface dirt from your shower head.

2. Fill a Bag With Vinegar

Take a plastic bag or sandwich bag and fill it with white vinegar. Then, hold the plastic bag over the shower head and tie it at the top, making sure the shower head is completely submerged. It's also vital you tie the bag on tightly so it won't fall off when you leave it.

With the plastic bag tied on tight, you can now leave the shower head to soak for at least an hour.

Once you’ve allowed the shower head to soak, you can carefully remove the plastic bag and give it a rinse with some hot water to remove any deposits. Then, take your scourer or toothbrush and give it a scrub to remove any extra stubborn dirt or limescale.

Finish off the outside with a sponge and you should be left with a shiny clean shower head.

Descaling A Shower Head Without Vinegar

If the above method hasn't worked or you don't have any vinegar, there are some other cleaning methods you can try. 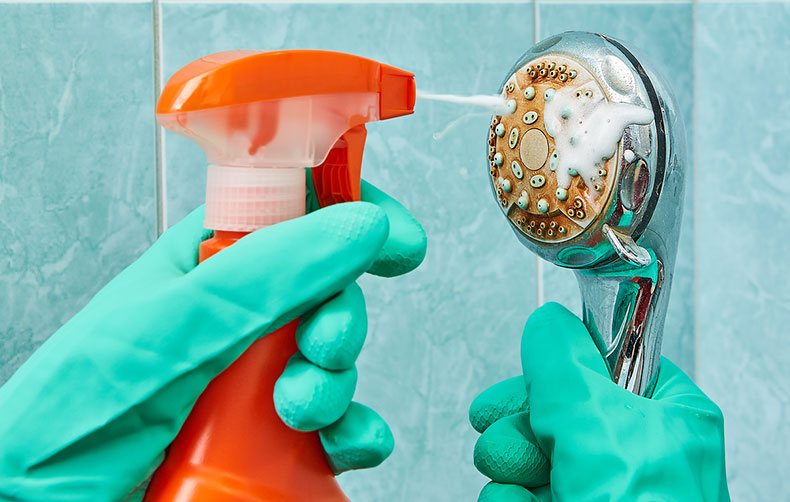 How to Clean a Shower Head with Baking Soda

Another non-chemical method for cleaning your shower head is with baking soda. Take some baking soda and mix it with water to form a paste, then spread this paste across the shower head and let it work for 15 minutes. When using baking soda, don’t leave it to sit for too long as the longer you leave it, the harder it will be to rinse off.

Once you’ve allowed it to work, wipe away the paste and you should be left with a shiny clean shower head. 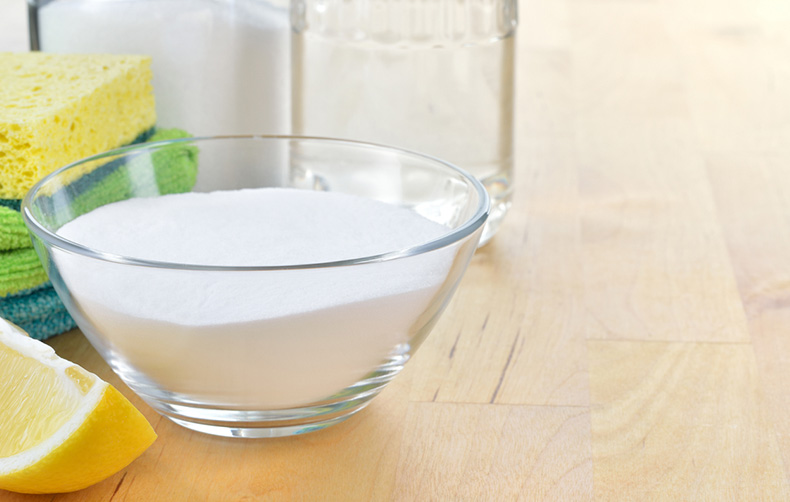 If you’ve tried vinegar with no success, you can always turn to a dedicated cleaner. Cramer Tap & Shower cleaner has been formulated to gently clean shower heads and remove limescale without causing any damage to the finish.

As with any cleaner, we’d recommend testing this product on an inconspicuous area first and always check the instructions to see if your shower head finish is compatible.

It's not designed for this purpose, but if you have some oven cleaner left over you can use it on your shower head. Oven cleaners are designed to cut through tough grease burnt into your oven, so they should be handled with care. Always wear gloves and use sparingly.

Spray the oven cleaner over your shower head evenly and leave it to work for 20 minutes before rinsing.

Polly Shearer, bathroom expert at Tap Warehouse suggests "cola is another household ingredient that is ideal for cleaning shower heads. The citric acid, phosphoric acid and tartaric acid in cola are all likely to be found in many household cleaning products, which makes it a great, cheaper alternative to expensive products. Simply fill a plastic bag with cola and tie it to the shower head, leaving to soak for an hour before giving it a rinse."

There’s no specific cola brand that works better than others, just check that it has the three ingredients listed above. Cola won’t give you the shine of other bathroom cleaners, but it’s great at removing those stubborn limescale deposits.

Once you've got your shower head clean you'll want to keep it that way! Here are a few simple steps you can take to prevent limescale building up again. Check out our guide for how to descale inside of a tap

Wipe Down After Every Shower
Wiping off any excess water and drying your shower head will go a long way to stopping limescale build up.

Clean With Vinegar Frequently
Polly Shearer also advises, "cleaning your shower head with vinegar once a month will keep on top of any limescale deposits before they become too difficult to remove."

Remove Your Shower Head Frequently
If you want to keep the nozzles on your shower head clear of limescale, it's a good idea to take it down relatively frequently and rinse out any of the smaller deposits which have begun to form.

You can also use vinegar to descale inside a tap to ensure it resists wear and tear and lasts longer.

If all has gone well, you should now have a shiny, clean shower head. If you've tried all of the above and your shower head isn't cleaning up, it may be time for a new one. At Tap Warehouse we have a great selection of fixed and handheld shower heads from a range of top brands.