What Are Butler Sinks?

Butler sinks are very similar to Belfast sinks but are often shallower and slightly wider. Historically, Butler sinks didn't feature an overflow but you'll find that many modern variations do. However, you'll only find a weir overflow on a Belfast sink. 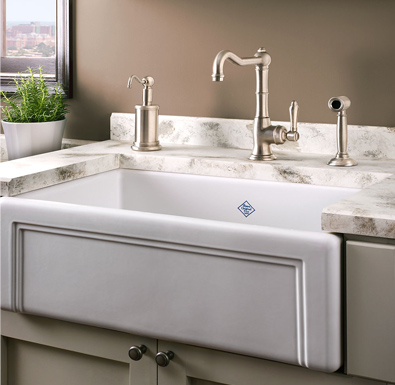 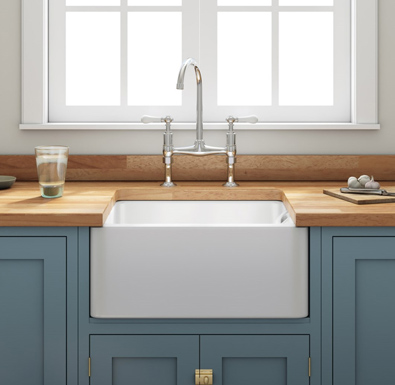 When looking through our Butler & Belfast kitchen sink range, you'll find that both come in variety of different sizes, shapes & materials. Read on to learn about the history of Butler & Belfast sinks and how you can choose which is best for your kitchen.

The Historical Difference Between Butler & Belfast

The differences between these sinks goes all the way back to Victorian times. The Butler sink was originally designed for the Butler’s pantry in London. Back in the day, London had far less readily available water than it does these days. While even today we would struggle to call the river Thames ‘fresh’, London in the Victorian times was in very short supply of fresh water. Because of this, the sinks had to be designed specifically to conserve water, a stark contrast to the Belfast models.

Belfast sinks are an adaptation of Butler sinks. Like the Butler sinks, they were primarily used by butlers but designed in Belfast. While London is further inland, Belfast is on the coast and so obtaining water was less of an issue. In Belfast, it was less important to conserve water, and so the Belfast sinks have a slightly different design.

As water had to be drawn from deep wells in London back in the 18th century, the London Butler sinks were built to encourage people to conserve water. Butler sinks then were made without a Weir overflow, unlike Belfast sinks which are built with an overflow, as at the time it didn’t matter if a little water got wasted.

Whilst more modern designs have seen the addition of a small overflow at the back of a Butler sink, the difference in the overflows remains the primary difference between the two.

If you're a stickler for the smaller details, the overflow of your kitchen sink will be important to you, so it's possible that this is the defining point in your all-important sink decision.

As the years have gone on, Butler sinks have increased in size as water supply has become less of an issue. However, the basic differences between the two sinks remain the same. Butler sinks were built slightly wider and shallower than Belfast models, to encourage the conservation of water while still fitting into large kitchen cabinets. Belfast sinks were usually deeper as limiting water used wasn’t necessary.

Ceramic sinks are hugely popular thanks to their durability, scratch and stain-resistant properties, and the fact that they are easy to clean. They look beautiful in traditional and country-styled kitchens, although more modern designs have grown in popularity in recent years.

Tap Warehouse has a huge range of ceramic sinks, both in Belfast and Butler designs and modern designs for those wanting the best of both worlds.

Farmhouse (or French Farmhouse) sinks are another type of sink that deserve a little recognition, although these days they are practically identical to Butler models. In France, the clay used to make sinks is slightly more refined than in the UK. Because of this, Farmhouse sinks often have thinner walls and look slightly more elegant. However, they still add a beautifully traditional feel to any kitchen, whilst being robust and sturdy enough to withstand dropped pots and pans!

Which one is best for my kitchen?

All three sinks add something beautifully timeless to a kitchen or utility room, but the differences between them are minor enough that you needn’t lose sleep over which one to go for! All three models of sink offer style, functionality and are available to suit a range of budgets.

Water pressure is measured in bars, with 1 bar being the force needed to raise water to a height of 10 metres. The higher the bar figure, the greater the pressure.

On an average day you’ll find Dominic leafing through a menagerie of interior design reads, forever in a life-long search for the latest and greatest trends. He looks after our CGI designs here at Tap Warehouse, often intertwining some of his favourite interiors with our newest products. Ask him on any day his favourite colour and you’ll likely get an answer ranging from burnt orange to a deep, stormy teal. Dominic might not be the strongest DIY-er in the team, but with a family background in the bathroom industry he’s gleamed a raft of knowledge over the years… most of which he can actually remember. In his spare time you can usually find him musing through a good book, whipping up a fresh brunch or lounging in a sunny pub garden.