Rimless Toilets: What's All The Flush About?

Rimless toilets are the newest trend in toilet design, and something that you'll be hearing about a lot over the next few years. Find out why in our latest blog.

Replacing the toilet in your bathroom is (for most) a very rare occurrence, thankfully, so it’s unlikely that you’ll have been keeping up to date with the latest in toilet design. But don’t fear though, for we are here to guide you through the world of the newest toilet on the block… the rimless toilet.

What is a Rimless Toilet?

Let’s start with the obvious question: what is a rimless toilet? Well, you might be a little disappointed to find out that it’s exactly what it sounds like; it’s a toilet without a rim at the top of the bowl. Whilst this doesn’t sound particularly exciting, as we’ll soon discover it can make a huge difference in your bathroom.

Why Does Removing the Rim Make a Difference? 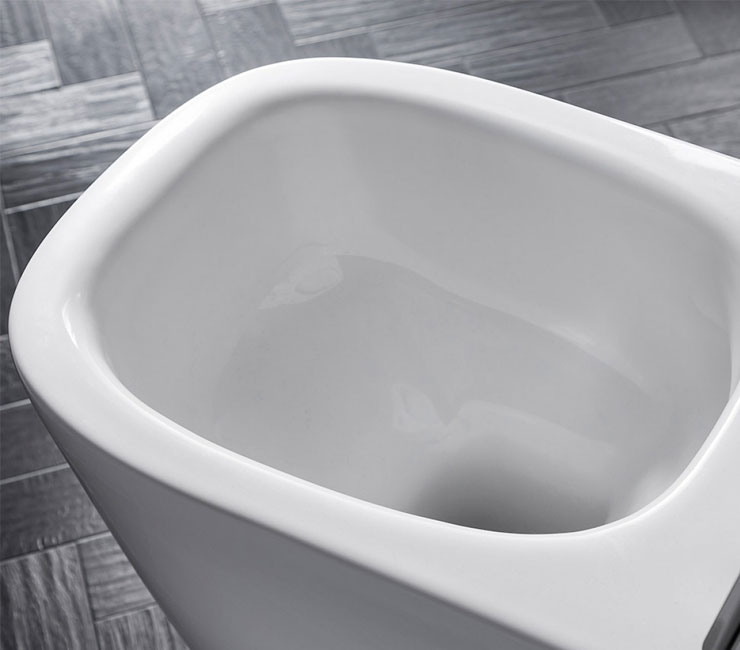 From the outside, a rimless toilet looks just like any toilet you’ve ever seen, but open the lid and peer inside and you’ll notice something different. It’s almost as though something is missing, and you’d be right - it is. By removing the rim, you not only creating a cleaner looking toilet in the artistic sense of the word, but a cleaner toilet in terms of hygiene as well.

Think about when you clean your toilet. Cleaning the outside of the pan is straightforward enough, but it’s when you get inside that it gets tricky. And why is it tricky? Because of that annoying rim at the top of the bowl where bacteria, limescale and grime build up. It’s always too small for you get any kind of sponge or brush in to wipe properly as well. Sure, you can use a toothbrush, but it never feels like you’re doing a particularly thorough job, and then you can’t even see the results of your labour once you’ve finished. Once you’ve done that, bleach is normally squirted in, but again you can’t really see what you’re doing and it feels more like you’re just papering over the cracks rather than properly cleaning.

Think about how much easier it would be to clean if there was no rim. You could simply wipe in one smooth motion. There would be no need for any brushes and you can see exactly where you’ve cleaned. There’s not really much more to say. We wouldn’t go as far as to say that it makes cleaning the toilet enjoyable, but it’s certainly much less dreaded and takes a significantly less amount of time.

What Other Advantages Are There?

We’ve already covered how much easier it is for you to clean a rimless toilet, but did you know that a rimless toilet keeps itself cleaner to begin with? Most rimless toilets use a direct flush technique that more evenly and more effectively cleans the entire pan. And of course, any bacteria or limescale simply gets washed down the pan instead of getting caught under the rim.

Another advantage of rimless toilets is their price. When a new technology comes to the market, it’s commonplace that until it becomes accepted and widely used by the public, the price is too far out of reach for most people. Look at HD televisions; when they first came onto the market, you would pay thousands for one. Then the popularity increases and the prices start to drop. The same is happening with electric cars. Unfortunately, some technologies - no matter how good they are - don’t take-off and their high prices never come down which ends up being their downfall. Google Glass springs to mind; a great idea but massively overpriced for the general public.

So how does this relate to rimless toilets? Well, despite the newness of the technology, rimless toilet prices are broadly similar to the current prices of our mid-range toilets, making them financially viable for almost everyone. We wouldn’t be surprised if the prices dropped further when they become more popular.

Are There Any Disadvantages?

Quite simply, no. Not for you at least. We’re obviously very sceptical about any new product that comes out, especially when the design is completely different to what we’ve been used our whole lives, but so far we haven’t seen or heard a single negative thing about rimless toilets. Customer feedback is very important to us and so far it’s all been positive. The only people who might take exception to rimless toilets are the manufacturers of the small nozzles on bleach bottles that allow you to squirt it under the rim, as these will now be obsolete.

What Rimless Toilet Options Are Available?

Now that you're armed with a metaphorical glossary of rimless toilet knowledge, it's probably about time to find something that's perfectly suited for your own bathroom.

One of our favourites is the Harbour Grace Rimless Toilet, which comes with everything you need to get flushing, including a soft-close seat. From the outside it still very much looks like your standard close-coupled toilet, but we all now know it's what's on the inside that counts. Its rimless design allows for a much more hygienic and easy-to-clean experience, and the water-saving dual flush cistern provides an eco-friendly choice for those flushes that might not require a full blast.

If it's a wall hung or back-to-wall rimless toilet you're looking for, RAK have an excellent collection of rimless pans that are effortlessly modern and fit wonderfully into any contemporary space.

Is There Anything Else to Take Into Consideration?

So there it is, all you need to know about the next big thing in toilet design - a sentence I’m sure you thought you wouldn’t be reading when you woke up this morning. As ever, feel free to leave us any comments or questions down below, or contact our customer service team at help@tapwarehouse.com or 01202 55 66 55 and they will be happy to help.