There’s no denying that the home is becoming increasingly smart, with the bathroom being no exception. But, while companies try to stay on top of the latest innovations and their competition, it means that any idea, no matter how practical or strange, is filled for a patent.

So, that’s why, we at Tap Warehouse, have decided to share some of the weirdest inventions that were never made before revealing what the future holds for (real) bathroom tech.

Patents are a form of intellectual property. They grant legal rights of the invention to the person or company that filed for the patent and, therefore, prevents anyone else from making or selling the idea themselves.

But whilst companies may file for a patent, the concept may never actually be made, such as these seven strange bathroom concepts below.

From the fully moveable bathroom to a bathtub that massages your back, are you ready to see the bathroom inventions that were never made?

1. Bathroom That Could Replace a Visit to the Doctors 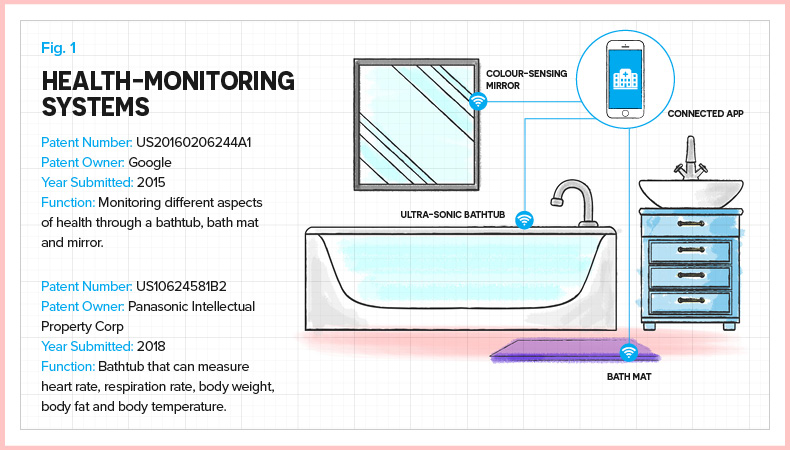 Whilst the idea of monitoring your health through an app or technology system isn’t new, we are, however, yet to see a widely accessible invention that can track our health in the bathroom. But luckily both Panasonic and Google have released recent patents of bathroom products that can analyse the user’s health.

In addition, Panasonic has submitted a patent of a bathtub which will help you track your health. This bath, should it ever be made, will you help you measure your heart rate, body weight, fat, respiration rate, and body temperature.

Although these patents were published a while ago and are yet to be transformed into real inventions, the rising popularity of health monitoring apps could mean we are on the cusp of further smart health tech in the bathroom. 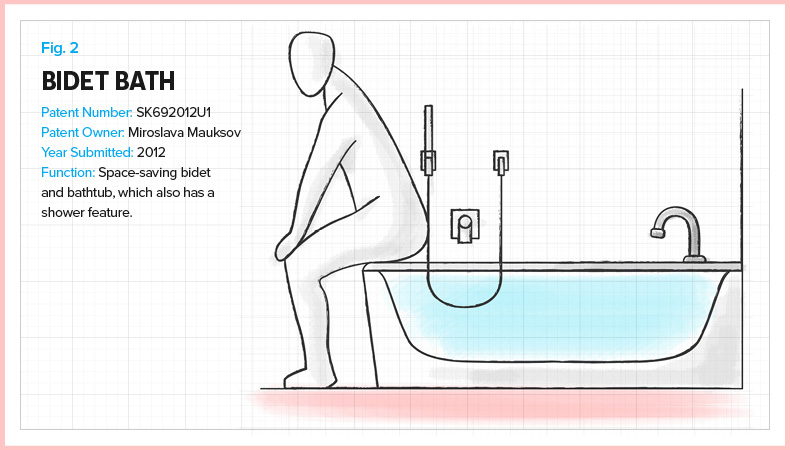 Bidets are becoming ever more popular, with Tap Warehouse witnessing a staggering 84% increase in sales in May 2020, when compared to May 2019.

However, despite their rising popularity, we’re not so sure this patent idea will take off. This quirky design, submitted as a patent in 2012, combines a bidet with a bathtub and shower space. But whilst merging these two bathroom products into one can save space, there are definitely more practical and hygienic solutions out there, such as adding a bidet to your toilet with a bidet seat.

3. Loo Knew? A Patent That Could Put an End to Toilet Seat Arguments 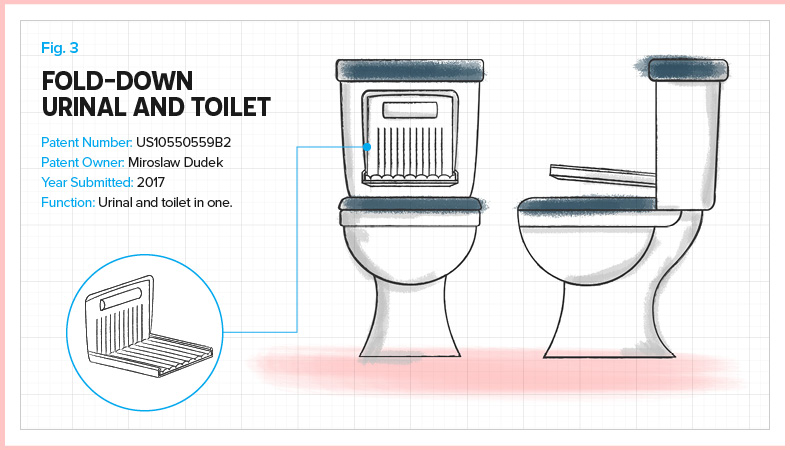 If you’ve ever lived with the opposite sex, you’ll no doubt have had an argument about whose job it is to put the toilet seat down. But what if we were to tell you that an inventor has come up with the perfect patent to end this argument?

In 2017, one inventor has had the ingenious idea of a fold-down urinal. This modified toilet tank functions as a fold-down urinal and toilet in one, providing a mess-free and argument-free way to use the toilet. So, who should put the toilet seat down, or urinal lid? With this invention in mind, it’s clear that the man who uses the urinal should close it. 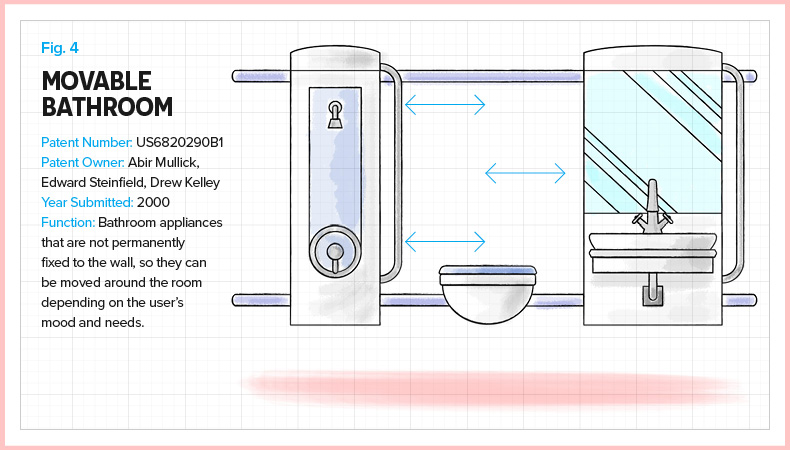 Do you get bored with the layout of rooms easily? Well, fear no more with this unique idea that could, one day, become a reality.

The only thing that cannot move in this bathroom idea is the toilet. However, the inventor alleges that the toilet seat can be adjusted to suit the height of the user. Multiple toilet seats can be stacked on top of each other or removed depending on the user’s needs.

The patent claims the floor even has a drainage hole, essentially turning the bathroom into a stylish wet room, so you can comfortably place your shower anywhere in the bathroom.

5. Water Good Idea: An Invention Which Massages, Cleans and Dries Your Body 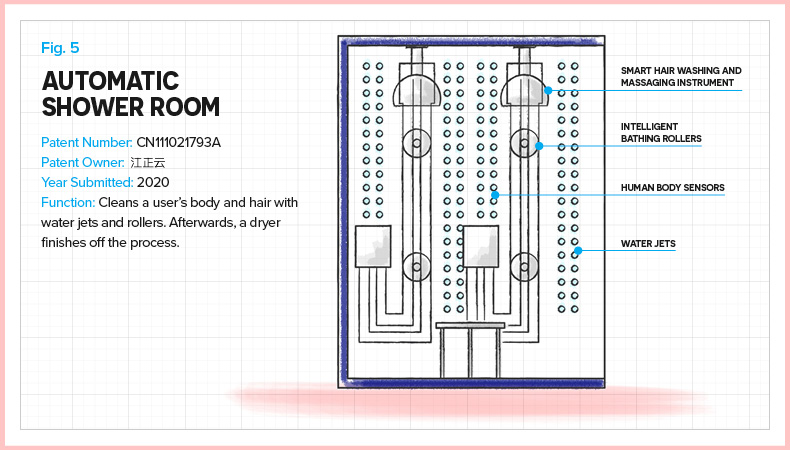 According to a patent filed this year, using your own hands to shower may soon be a thing of the past. The description of the idea alleges that this shower room uses sensors to detect the human body and head, allowing water jets and rollers to clean the user’s body from head-to-toe.

In addition, this futuristic tool can shampoo hair with gel claws to relaxingly massage and rinse. And, when you’re finished showering, it will even dry your body for you. 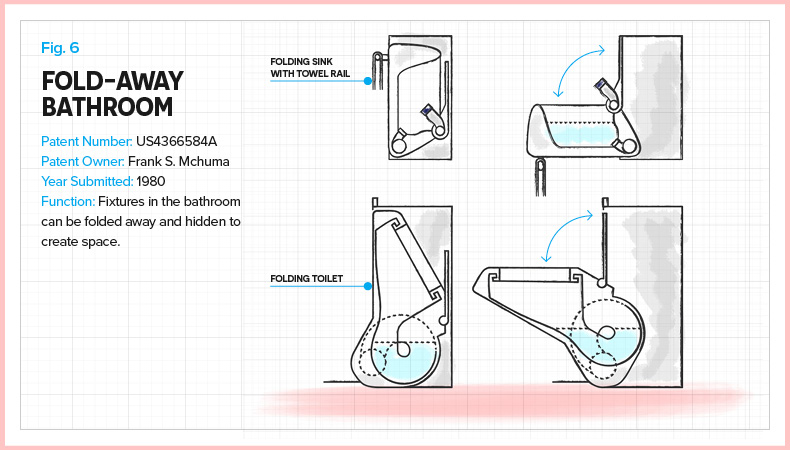 Have you ever struggled to design a bathroom because you found the space to be too small? Well, luckily an inventor in the US has come up with a possible solution – the foldable bathroom. The patent alleges that the toilet, urinal, bidet, and basin can all be folded away, with the basin cleverly becoming a towel rack once folded.

According to the patent description, bathroom appliances are useless and take up valuable space when not in use; we beg to differ. Maybe this is why the patent was filed in 1980 and is yet to become a real invention? But it’s interesting all the same.

7. Top Tub: A Bathtub Which Will Give You a Massage

Ensuring you don’t miss a spot when you’re cleaning your back can be tricky, especially if you’re not quite flexible or have limited mobility. However, inventors in China want to put a stop to that.

This bathtub incorporates a mechanism that can spray the back with water, as well as a massaging device to scrub clean. The patent claims the invention can surge water from the bathtub to give a back massage, improving the quality of bathing forever.

Smart Ways to Use Tech in Your Bathroom Right Now

Whilst we’ve just uncovered the ways in which inventors are hoping to change our future perception of what makes a bathroom, it seems that Brits want solutions right now.

Luckily, we have uncovered some tech-savvy bathroom bits you can buy right now.

1. Make a Trip to the Bathroom Lavish with a Japanese Style Toilet Seat

Whilst traditional bidets are great for hygiene, there’s no denying that they can take up valuable space in the bathroom. However, this Japanese style toilet seat solves that.  What’s even better,  it has multiple functions, unlike a traditional bidet.

The bidet toilet seat is modelled after Japanese toilets. It’s packed with functions, from heated seats to a night light that eases those late-night trips to the bathroom. With so many uses, you can make each trip to the toilet as luxurious as the last one.

2. Control Your Shower from Bed with Digital Showers

Advances in technology mean you don’t need to be near your shower to turn it on. These digital showers allow you to control the shower all from the comfort of your own bed. You can even set it at your desired temperature and flow. Not only that, but the most modern digital showers can be controlled all through your phone.

3. Play Your Favourite Songs with a Bluetooth Mirror

There’s a vast array of mirrors out there, but if you’re into gadgets, you’ll not want to give these bluetooth mirrors a miss. Listen to your favourite songs through the built-in speakers by connecting the mirror to your phone. And you don’t have to worry about steam fogging up the mirror, with heated demister pads and illuminated LEDs, the mirror will always be clear.

Interested to learn more about the latest bathroom news or gadgets? Stay up-to-date with our latest news.

Water pressure is measured in bars, with 1 bar being the force needed to raise water to a height of 10 metres. The higher the bar figure, the greater the pressure.