Be honest with yourself: When was the last time you used that spiralizer of yours? Or your juicer? Or even your omelette maker?

Whilst it’s easy to fall into the trap of purchasing the latest kitchen must-have as a means of getting more creative in the kitchen or to encourage healthier diet habits – our research has found that purchasing these gadgets doesn’t always work out to be all that cost-effective.

After surveying our customers about their kitchen gadget purchases, and how often they use each of these products, we’ve uncovered which ones are worth buying and which ones are not – saving Brits both money and cupboard space in the long run… 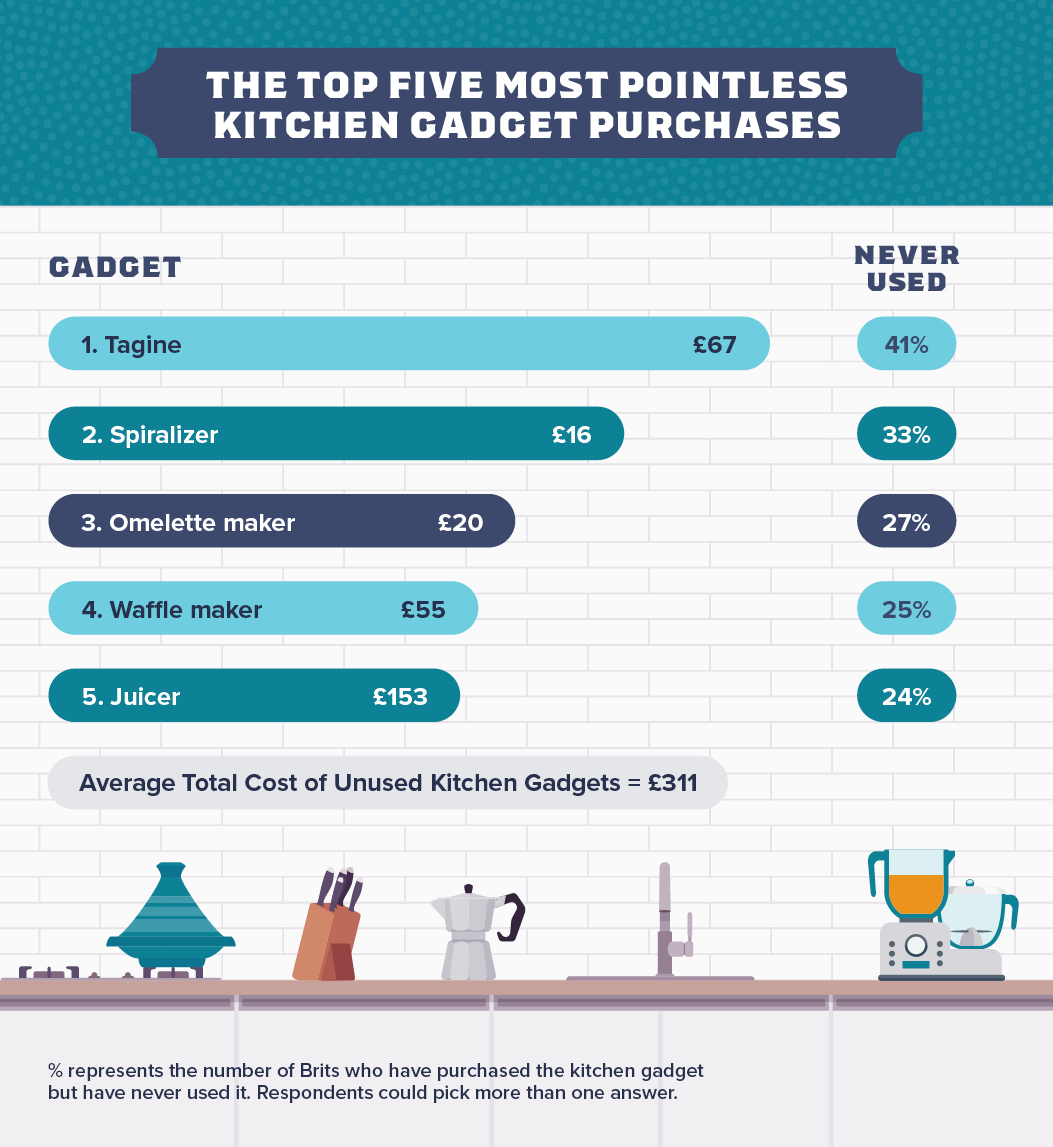 In total, the five gadgets amount to £311.00 – which is over half (59%) of the average weekly wage in the UK at £530. Now that’s a lot of money to spend on products whose sole purposes are to sit in a kitchen cupboard and collect dust…

We’ve all been on holiday and been so impressed by the colourful cuisine, that we try and replicate the dish at home. However, if you find yourself inspired by the Instagram-worthy crockery that is a tagine, perhaps don’t purchase it, as a staggering 41% of owners never use theirs.

With the average tagine costing £67, that’s a lot of money to be wasted and, in fact, could be spent on two Moroccan takeaways instead, which chances are is likely to taste more authentic, too.

Spiralling Spending: 1 in 3 Owners Never Open Their Spiralizer Up Out of the Packet

The second ‘least likely to be used’ kitchen gadget is the spiralizer, which can be used to transform vegetables, such as courgette or sweet potato, into a healthy alternative to pasta. However, with 1 in 3 (33%) owners never taking the device out of its packet, perhaps the good intentions of being healthy weren’t powerful enough to resist the delicious, more traditional type of pasta.

Not So Eggs-cellent: Over a Quarter of Omelette Makers Are Never Used

In third place, we have the omelette maker, which was a surprising revelation, as the egg cooker came out on top as the most likely to be used kitchen gadget. However, the omelette maker clearly isn’t as eggs-citing with 27% of owners never using theirs. With the average costing £20.00, we’d instead recommend purchasing the egg cooker for £15.00 – saving yourself £5.00, and guilt from not using the gadget.

If you find yourself to be a bit of a sweet tooth, you may consider purchasing a waffle maker, however, our findings have uncovered that this may be a bit of a waffly bad idea. Unfortunately, 1 in 4 (25%) waffle makers purchased by Brits, never end up being used, and with the average one costing £55.00, that’s a lot of money to waste.

Not Such a Sweet Deal: A Juicer is the Fifth Most Likely to be Used Gadget

Finally, in fifth place, we have the juicer. Our findings uncovered that 24% of owners have never used their juicer, and as the most expensive gadget of all those analysed (at £153.00), that’s a really expensive item to purchase without the real intent to use. 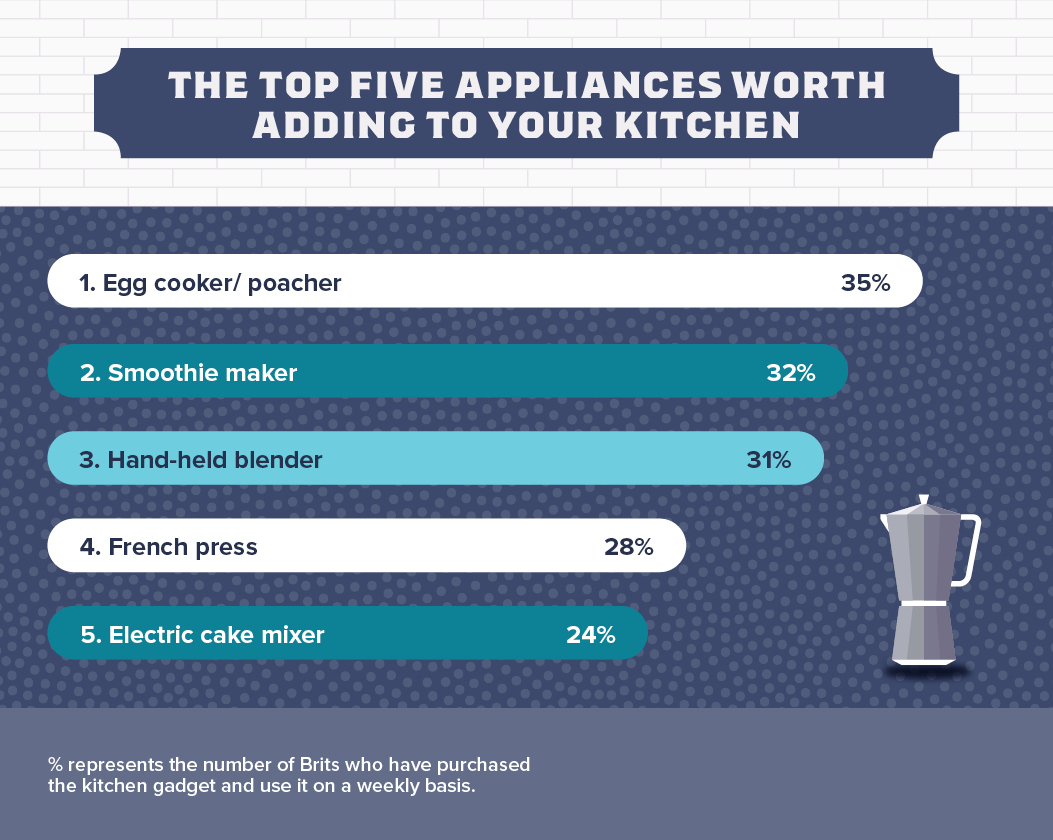 The results from our survey also uncovered the top five kitchen gadgets that Brits use at least once a week, making them worth every penny.

How Eggs-quisite: The Most Useful Kitchen Gadget is an Egg Cooker

Surprisingly, the number one kitchen gadget is an egg cooker/ poacher, with 35% of owners using this device at least once a week. With the average egg cooker costing £15 and on the basis that the average owner uses it once per week, this amounts to just 29p per use per year. Egg not included, obviously.

Smooth Savings: 86% of Brits Have Purchased a Smoothie Maker at Some Point

Our survey results revealed that a staggering 86% of adult Brits have purchased a smoothie maker at some point in their lives, and it seems that it encourages healthy habits for many, with nearly a third (32%) of owners using it weekly. With the average smoothie maker costing £57 to purchase, this works out at £1.10 per use, over the full year.

Souper Savvy: 31% of Hand-Held Blender Owners Use Theirs on a Weekly Basis

Now that the colder months are amongst use, creating homemade soups are not only a cost-effective meal, but a one that’ll warm you up too. With this in mind, it’s almost unsurprising that 31% of hand-held blender owners use theirs every week. With the average hand-held blender costing £30, this is an effective investment, and one that costs just 58p per use.

Un-bean-liveable: 28% of Cafetiere Owners Use Theirs At Least Once a Weekly

With Brits enjoying 95 million cups of coffee per day, there’s no denying that we’re a nation of coffee lovers. So, it should come as no surprise that a cafetiere came out forth on the ‘most likely to be used’ list, with 28% of owners using theirs on a weekly basis. This works out at 44p per use for the cafetiere, which is a ‘latte’ cheaper than buying a takeaway coffee.

Throughout the lockdown, Brits have certainly gone bonkers for baking, with UK Google Searches for ‘banana bread recipe’ increasing a staggering 508% when compared to the same period last year. However, it appears that this hobby is here to say, with almost 1 in 4 (24% of) cake mixer owners using theirs on a weekly basis. Now, that’s a lot of baking over the year.

In addition, we also asked our customers what kitchen gadgets they plan on purchasing in the future, to assess if whether the items on their wishlists are worth purchasing:

In first place is the bread maker, with a staggering 1 in 5 (21%) Brits planning on purchasing one in the foreseeable future.

Although many Brits purchase one to explore pasta-bilities, 29% of owners have never used theirs, and a further 35% have only used it once – suggesting that the novelty wears off once they realised the effort required to create homemade pasta.

Mealy Worth It: 1 in 7 Brits Want to Purchase a Slow Cooker

In (joint) fourth place is the slow cooker, with 1 in 7 (14%) of Brits hoping to buy one. As one of the most time-saving and cost-effective kitchen gadgets out there, it should come as no surprise that slow cookers are worth purchasing, with 46% of owners using it at least once a month, including the 20% that use theirs on a weekly basis.

The other gadget in joint fourth place is the smoothie maker, which was also placed second in our ‘most likely to be used’ list, after just short of 1 in 3 (32%) owners admitted to using theirs at least once a week.

Dom Lees-Bell, Digital Content Manager here at Tap Warehouse, had this to say: “We’ve all gone into the kitchen appliances area of a shop to look for an essential item, only to leave with an exciting but spontaneously purchased new gadget in hand. However, whilst Brits purchase these items with good intentions, our findings have uncovered that, unfortunately, some of these gadgets become a fad.

For example, some of the least used kitchen gadgets are the waffle maker, spiralizer, and juicer – all of which require a lot more effort than purchasing premade waffles, spiralizers and juices.

However, Brits still have high hopes of getting creative in the kitchen and after picking up an initial interest during lockdown, are looking to focus more on baking. 21% of Brits hope to purchase a bread maker in the future, and 19% plan on purchasing an electric cake mixer – highlighting that Brits are happy to spend more time baking than they are cooking everyday meals, where they prefer to use less gadgets and more premade products.”

Are you interested in uncovering what other items Brits have been purchasing throughout the lockdown? Why not check out our blog on the most popular houseplants of this period?