Designing a new bathroom sounds like it’s something that should be fun, but if you’ve ever had to do it, you’ll realise that it can be anything but. Over the years it has got easier, but finding fixtures and fittings that not only match with each other, but also with the colour scheme in your bathroom can make you question how Laurence Llewelyn-Bowen managed to do it for all those years with so few tears and tantrums. 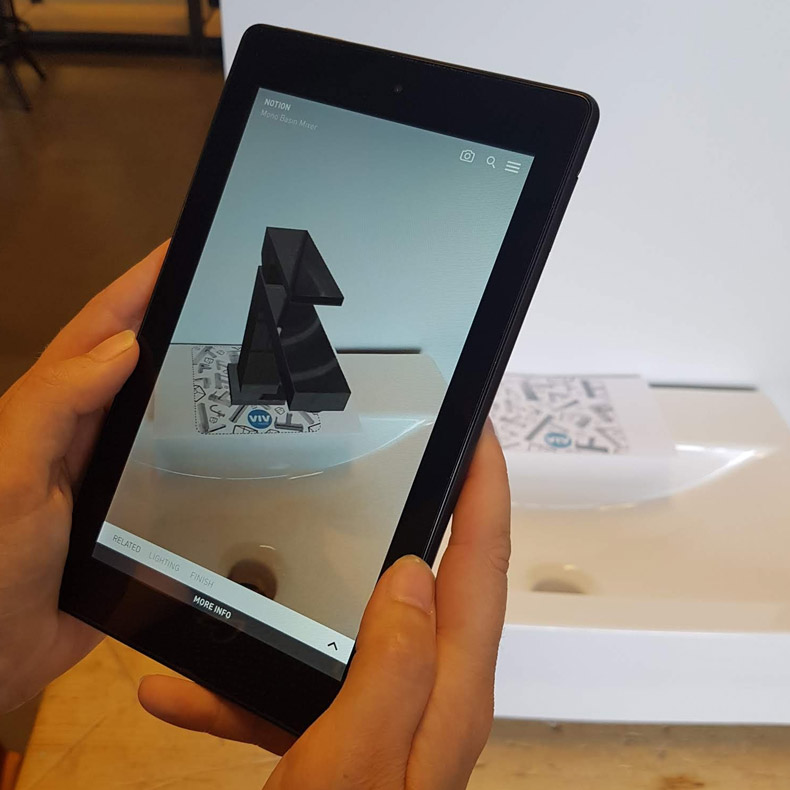 VIV by Vado is the latest in bathroom design and unlike anything we’ve ever seen in the bathroom world before. It’s the kind of thing that makes you run in the other room to show your partner, and the best thing about it is that it’s absolutely free. And not only that, but unlike other bathroom design software, you don’t need a professional to do it for you. In fact, it’s designed specifically to be used by you, in your bathroom.

VIV is an augmented reality app (for Android and iOS) which allows you to see exactly what Vado’s taps and showers would look like in your bathroom. Simply download the app, print off the special marker and place it where you’re looking to put your tap or shower. The app will show you (to scale) exactly what that tap will look like. For taps with more than one finish available, you can view the tap in each finish. You can even change the lighting to see what your tap will look like in direct sunlight or under bathroom lights.

Vado’s extensive range is featured on the app, from the modern ranges like Altitude, to the traditional ranges like the Kensington taps.

Is 3D planning now a thing of the past then?

Not quite. Whilst VIV is certainly pointing us to where the future lies, it’s not suitable just yet to design a whole bathroom, so there is still a big market for 3D planning. But VIV certainly fills a gap, and where 3D planning is now such big business - and also so time-consuming - many companies now charge you for it. This makes it unlikely that someone would use it just to decide on a single tap or shower, and that’s where VIV comes in.

VIV is ideal if you’re just looking to replace an old tap or shower, or you’re almost finished with a bathroom redesign and can’t quite decide on what tap looks best.

Is there anything else it can do?

Yes. If there are a few items that you’ve found that you like but you want a second opinion on them, you can save them to your favourites for easy viewing later. You can also view them from any angle (without the need for the marker) with the 360° photo viewer. And finally, each product has a link to Vado’s website so you can view tech specs, etc. for your chosen tap to see if it’s suitable for your home.

What will there be after VIV?

As with all technology, as soon as something new is released, we immediately start talking about what’s going to replace it. Take mobile phones, for example. No sooner had 4G network coverage been rolled out, they then started talking about 5G. For some of us, it would just be nice to have any signal full stop! VIV has barely been launched and we’re already wondering what’s next, but it’s given us a sense of what might be in the future, and it’s exciting (for us bathroom nerds at least!)

One day we would like to see bathroom design combine with virtual reality to create a system where you can design the entirety of your bathroom and then use a virtual reality headset to ‘walk around’ your new bathroom. Whether this is just wishful thinking on our part, only time will tell. For now, we'll make do with the hours of fun that we can have with VIV.