Whilst we’ve been stuck at home during the pandemic, we’ve spent more time than ever on social media. Not to mention, to keep ourselves occupied, many of us have decided to learn a cooking skill or two. So, it’s not so surprising to see food influencers rise in popularity over the past year. However, whilst some foodies are just practicing a hobby, others are turning their passion into a career.

To unveil who’s making the most money from their food creations, Tap Warehouse have analysed the top food influencers with the most followers in the UK and estimated their potential earnings from brand sponsorships. Then, we’ve revealed which foodies are potentially cashing in with brand collaborations globally on the latest platform: TikTok. 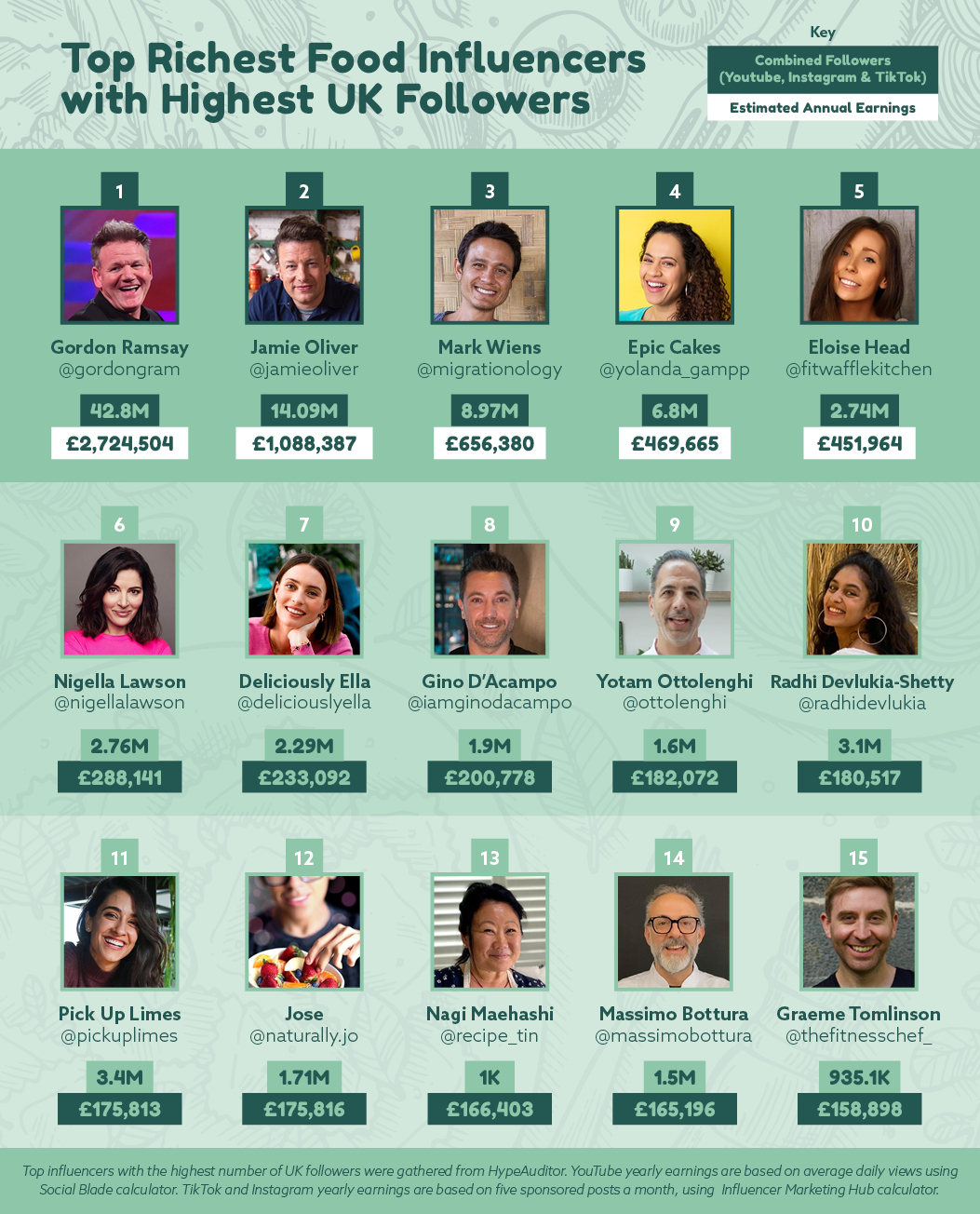 Gordon Ramsay is Estimated to Earn £2.7M from social media

Gordon Ramsay is undoubtedly the most recognised chef in Britain thanks to his famous restaurants and reality cooking shows. However, on social channels he’s known to hilariously slate users’ recipes as well as showcasing his own mouth-watering creations.

Gordon Ramsay has a combined 42.8M followers on YouTube, Instagram and TikTok, which makes him the richest food influencer. Gordon Ramsay has the potential to earn a huge £2.7M a year – with one post on Instagram earning him £22,949.

Jamie Oliver, otherwise known as the Naked Chef, is a well-loved TV chef in the UK famed for his no nonsense approach to cooking. Oliver has created countless recipe books and starred on cooking shows. So, it’s no surprise that he’s amassed a whopping 14.1M followers across YouTube and Instagram.

Thanks to his many followers, the Naked Chef can make £16,256 from one Instagram post alone. When looking annually across YouTube and Instagram, Jamie Oliver can earn a huge £1.08M, making him the second most successful food influencer.

Mark Wiens (@migrationology) is Estimated to Earn £656.3K Sampling Food from Around the World

Mark Wiens has gained 7.67M subscribers, and receives 924,000 daily views on YouTube, due to his entertaining content showcasing food from across the globe. His YouTube stats means he can make £1,394 in just one day from YouTube.

Epic Cakes (@yolanda_gampp) is Valued to Earn a Whopping £469.6K with her Cake Creations

Amazing cake designs have taken over social media in recent years, remember the craze of cakes that look like realistic things? Well, Yolanda Gampp was at the forefront of it. The cake artist has only risen in popularity as many of us have turned to home baking to take our mind off the pandemic. So, much so that Yolanda Gampp is our fourth most successful food influencer with a total of 6.8M people following her.

Yolanda Gampp can earn £2,637 from one YouTube video, and £5,190 from one Instagram post. Across the year, that makes her an enormous £469.6K, all from her creative cake designs.

A post shared by Epic Cakes - How To Cake It (@yolanda_gampp)

Britain’s Chefs are Missing out on Average £221K from TikTok

With TikTok being an up-and-coming platform, many food influencers are yet to create an account on the channel. We wanted to know just how much famous food influencers could make on TikTok. We averaged their following on other channels to estimate how much they could earn annually:

On average, these British chefs could make a whopping £221K just from the short video sharing platform. The influencer that is missing out the most is Jamie Oliver. If he were to create a TikTok, he could be earning an extra £600K a year.

Most Successful TikTok Food Influencers Around the World

TikTok is still a relatively new platform compared to other social channels, it’s unique format and rapid growth has created a new wave of food influencers across the globe. We have many ingenious food hacks to thank TikTok for such as the baked feta pasta and the clever tortilla fold. With this new breed of food influencers, we wanted to know who’s earning serious dough on the platform.

Our research has revealed that not only is Gordon Ramsay the most successful food influencer in the UK, he’s taking the world’s top spot on TikTok. Ramsay has the potential to earn £788K annually!

But, what other global food influencers are making big bucks from their TikTok? 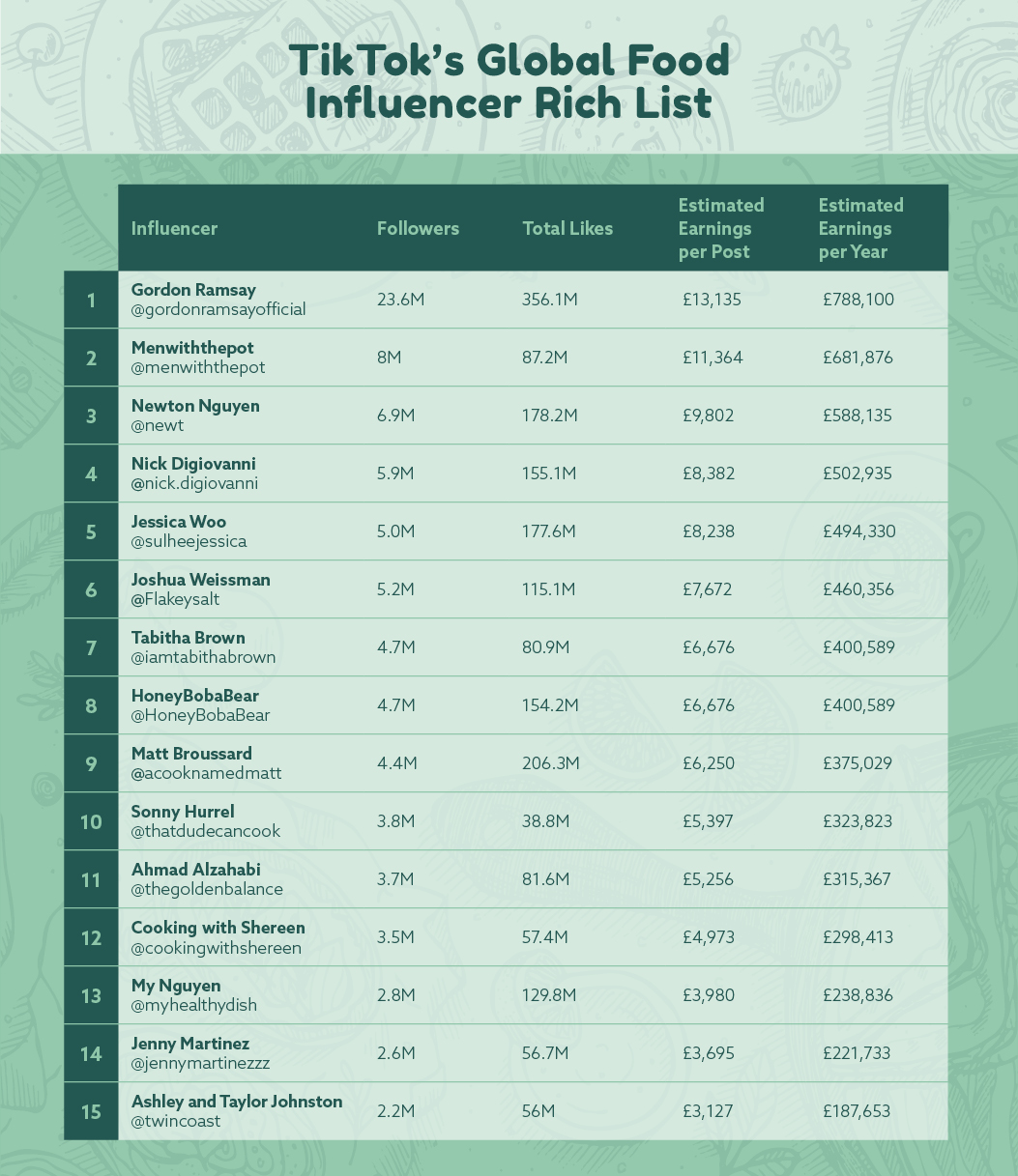 @menwiththepot is The Second Richest TikTok Food Star with £681.8K

We spent the vast majority of last year indoors, so it’s little surprise that many of us have been craving outdoor adventures. Which may be why this interesting TikTok account has grown in popularity. @menwiththepot create gourmet food from scratch with just a campfire in the woods!

The third most successful food influencer on TikTok is @newt, aka Newton Nguyen with 6.9M followers and 178.2M likes.

Newton Nguyen has inspired many across the globe to practice their culinary skills with his simple recipes that look incredibly tasty. His bite-sized videos have earned him an estimated £9,802 for every post and a huge £585,135 annually.

Nick DiGiovanni is a US food star who made his name by being the youngest ever MasterChef US finalist. Today, you’ll likely find the chef creating interesting dishes on TikTok.

His short, snappy videos have garnered him a whopping 5.9 million followers on TikTok, making him the fourth top food creator on our list. The foodie can expect to make £502,935 in a year, with just one video potentially earning him £8,382.

You may be wondering how you can achieve food fame and launch a new career on social media. Whilst cooking can be a fun hobby, it’s not without dangers. Our study revealed 9 in 10 Brits risk food poisoning with shopping bags! And you can also read more about tips for the kitchen with our blog.

Tap Warehouse gathered data from HypeAuditor to reveal the influencers with the highest proportion of audience in the UK. Followers were gathered from YouTube, TikTok and Instagram. YouTube yearly earnings are based on average daily views using Social Blade calculator. TikTok and Instagram earnings are based on potential brand collaborations using Influencer Marketing Hub calculators, yearly earnings based on five sponsored posts a month.

To find out the top food influencers on TikTok, we gathered accounts by studying the top food hashtags such as #food #tiktokfood #foodtok #recipes.

Figures were converted from US dollars to pounds as of May 2021, all other data correct as of this date.

Thermostatic Radiator Valves (TRVs) automatically adjust the flow of hot water to your radiator based on the temperature of the room. This helps the radiator maintain a constant temperature.