Britain is facing a mental health crisis. Research by the Mental Health Foundation found that three-quarters (74%) of Brits felt they were ‘unable to cope’ because of stress at some point last year. Consequently, every year, millions of working days are lost due to stress. But most shockingly, the number of NHS admissions for stress and anxiety is increasing annually. With all of this in mind, it’s clear that the pressures of life are taking a toll on our society.

So, to help raise awareness, we at Tap Warehouse have investigated the rising stress levels in Britain, uncovering how it’s affecting the UK - from the NHS to the workplace. As well as this, we have also revealed the easily accessible ways to relax, both in and outside of work.

In this report we will be covering:

For a Quarter of UK’s Workforce, Unemployment Would Be Less Stressful than a Low-Paying Job

The University of Manchester compared the health of those who were unemployed to those who gained work in poor-quality (low-paying or high stress) jobs. The research analysed 1,000 unemployed people, reviewing their health and stress in the following years.

The researchers discovered that chronic stress was distinctly higher for adults who moved into poor quality work than for those who remained unemployed. Not only did the adults who transitioned into poor-quality jobs have higher stress levels, but they were more susceptible to an array of health problems.

Alarmingly, our research found that 27% of the UK’s workforce are employed in low-paying jobs. That amounts to a whopping 8.8 million Brits that may be vulnerable to stress related health issues.

Work-Related Stress Has Risen 29% Over the Past Five Years

Research from the Health and Safety Executive has also revealed the number of workers diagnosed with stress, anxiety or depression has increased by 29% over the past five years.

Unsurprisingly, this has led to 12.8 million working days lost to stress in 2019. This means for every worker that has stress, depression or anxiety, on average they will take 21.2 days off. Sadly, in 2019, stress is responsible for 54% of all working days lost due to poor health.

Not only has this cost employers £42 billion per year but the public too. £14.4 billion worth of tax is missed annually, which means that public services such as healthcare could be missing out on this extra money.

What's more, the single biggest cause of workplace stress is ‘workload’ as reported in 44% of cases of stress. Additionally, 14% of workers felt like a ‘lack of support’ was another main reason they were stressed.

In the workplace and outside of work, research reveals that women are much more likely to suffer from stress than men. NHS hospital data shows from 2017 to 2019, 58% of stress admissions to hospital were women, compared to just 42% of men.

Similar findings can be seen in the workplace. 59% of reported cases of stress were from women and 41% from men. 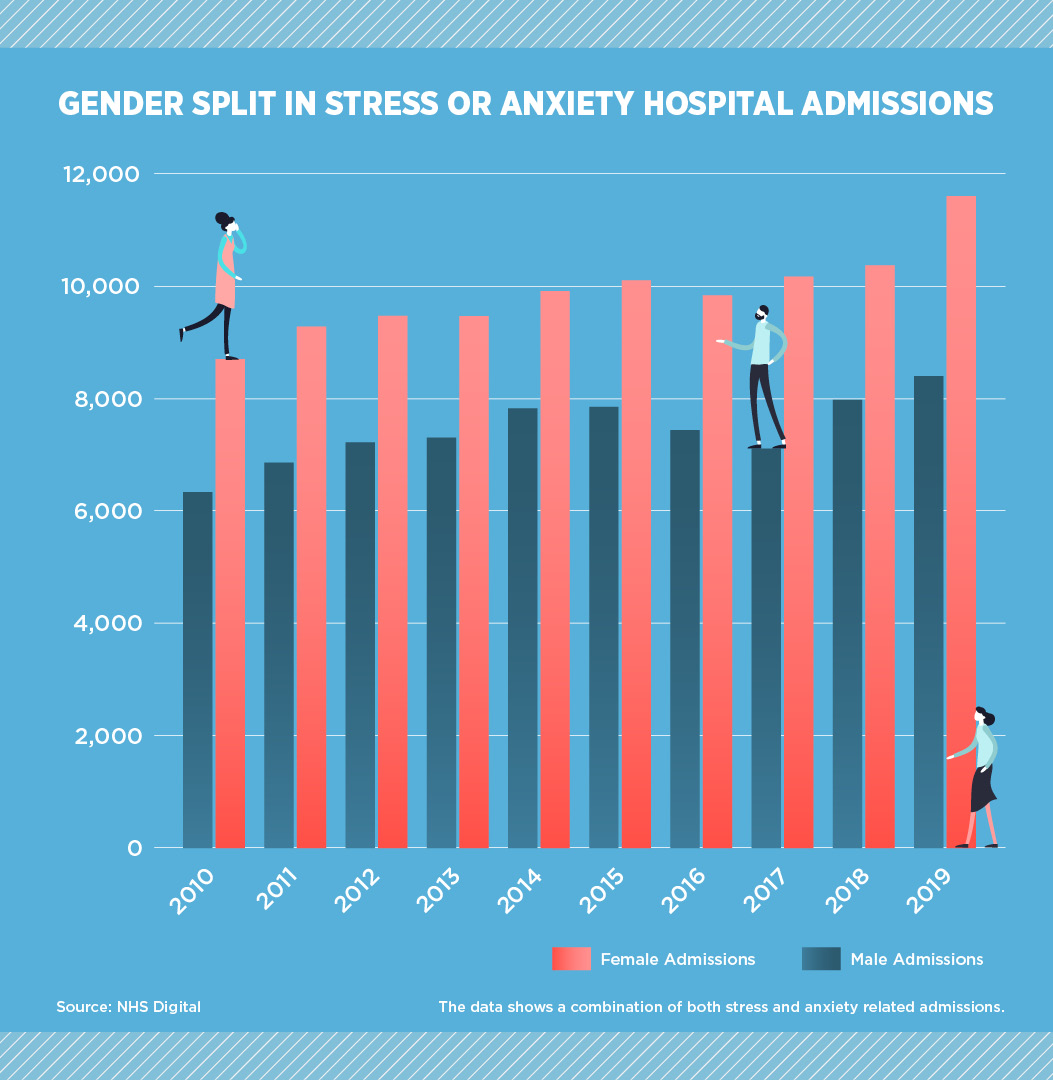 Reason One: The Gender Pay Gap
Unfortunately, as it currently stands, there are no sectors where women are paid the same as men. In fact, there is an overall pay gap of 11.9% in the UK where men are paid more.  This pay gap is not only affecting womens’ finances but their mental health too.

A wellbeing survey by health insurance provider, Cigna, also uncovered that 75% of British women do not feel confident about their finances compared to 62% of men.

Reason Two: Managing Family Life and Work
A woman's responsibilities in the home and their family life could be another key reason why women are more stressed. Research into 6,025 women, comparing full-time working mothers to women who worked but had no children, found a dramatic difference in stress. Working mothers with one child were 18% more stressed. But if working women had two children - their stress levels jumped to 58%.

Reason Three: Women’s Genetics & Hormones
However, another explanation for women feeling more stressed could be due to hormonal differences. The hormones associated with symptoms of depression fluctuate much more in women than men, which can cause an imbalance and lead women to feel stressed. Along with hormone differences, women’s genetics have a stronger predisposition for depression - based on identical and fraternal twin studies.

Reason Four: Men Less Likely to Admit Mental Health Concerns
Despite women seemingly being dealt a bad hand when it comes to stress, there are indications that men deal with just as much stress but perhaps don’t voice their feelings. The Mental Health Foundation found that 28% of men didn’t seek medical help for their most recent mental health concern This is compared to 19% of women.

Sadly, suicide represents the largest cause of death for men under 50. In 2018, 75% of suicides were among men, which has been the case since the 1990s.

So, although research reveals that women are more stressed, it’s most likely due to men not opening up about their mental health.

How Relaxation Can Improve Your Health & Mental Ability

Today’s world is certainly stressful, and there’s no denying we all feel the effects of it. But, telling yourself to relax is sometimes easier said than done. However, that’s no reason to give up just yet. In the video below, Tedx speaker and relaxation expert, Bryan Russell, reveals the secret to relaxation by using breathing techniques.

In the video, he also notes just how important it is to relax, as when we’re in these high-stress states our immune system and cognitive ability is lowered. This means we’re more susceptible to illnesses and making bad decisions.

How to Relax Throughout the Day, According to Science

Our research shows the workplace can be particularly stressful. However, if you’re at work it can be hard to practice de-stressing methods. That’s why Tap Warehouse have analysed the best means of relaxing at every part of your working day, and even at the weekend.

At the Start of Your Day

Before a Meeting or Interview 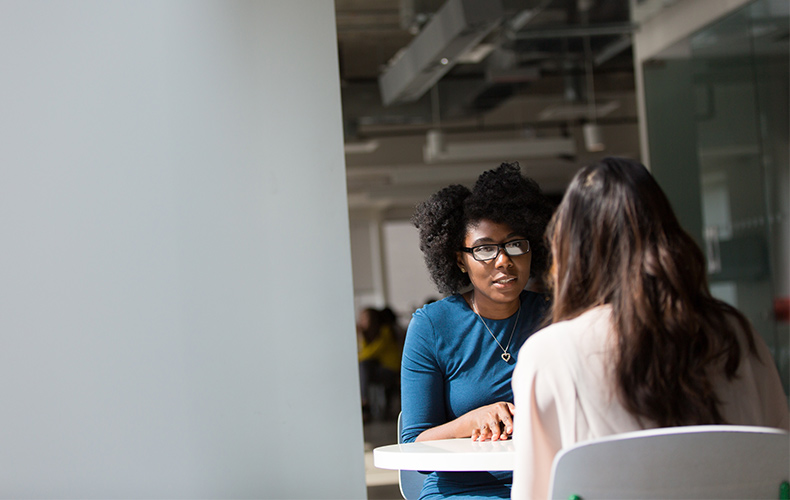 If you need to reduce stress quickly before an important meeting, you should consider: 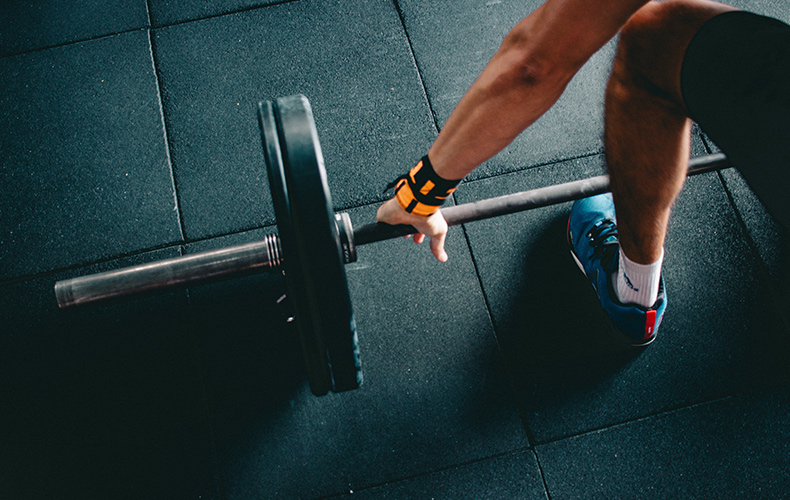 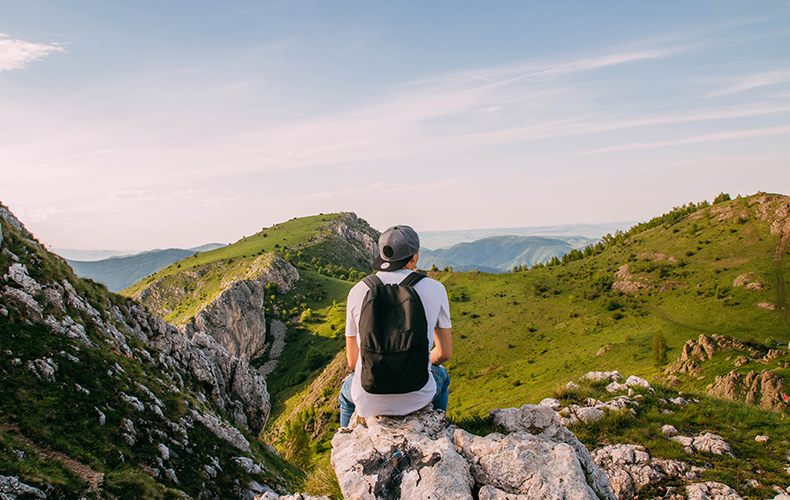 No matter who you are or what situation you’re in, it’s apparent that we all feel stressed from time to time. With our research clearly indicating that stress is on the rise in the UK, it’s never been more important to take time to focus on yourself and your mind.

If you feel like stress is getting too much or you believe you’re struggling with your mental health, there’s help available from your GP but mental health charities too, such as Mind and Anxiety UK. However, if you are in immediate distress, visit a local A&E.

Flow rate is measured in litres per minute and is an indication of the performance of a product at different water pressures. The higher the flow rate, the more water is produced by the outlet per minute.