What we get up to in the bathroom is rarely discussed, despite it being a natural part of our daily life.

Tap Warehouse have uncovered just how weird (or normal) Brits' bathroom habits are. So, how many of us really wash our hands after going to the loo and do women wipe the right way? Read on to see if you’re in the majority or minority. 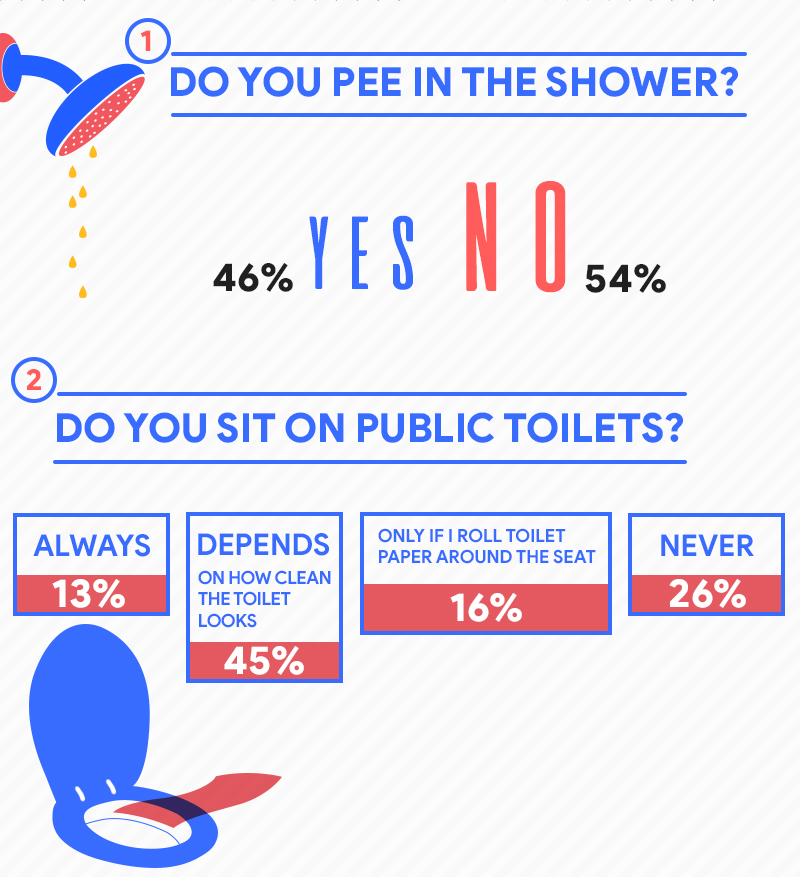 Our survey results revealed that almost double the number of men (63%) wee in the shower, compared to women (37%).

However, for the 63% of women that are put off by weeing the shower - you’re missing out. Did you know that it’s actually the key to building strong pelvic floor muscles? Urologists reveal that if you squat whilst urinating in the shower, you engage your pelvic floor and help tone the muscles that control your bladder and bowels.

For most of us, visiting a public bathroom isn’t the most enjoyable experience; they can be riddled with germs and bacteria. So, when you do find a public toilet that looks pristine, you may be tempted to sit on it. But did you know that the average public toilet is home to 500,000 counts of hidden bacteria? That’s probably why a quarter (26%) of the UK admit to ‘never’ sitting on a public toilet - even if it looks spotless. 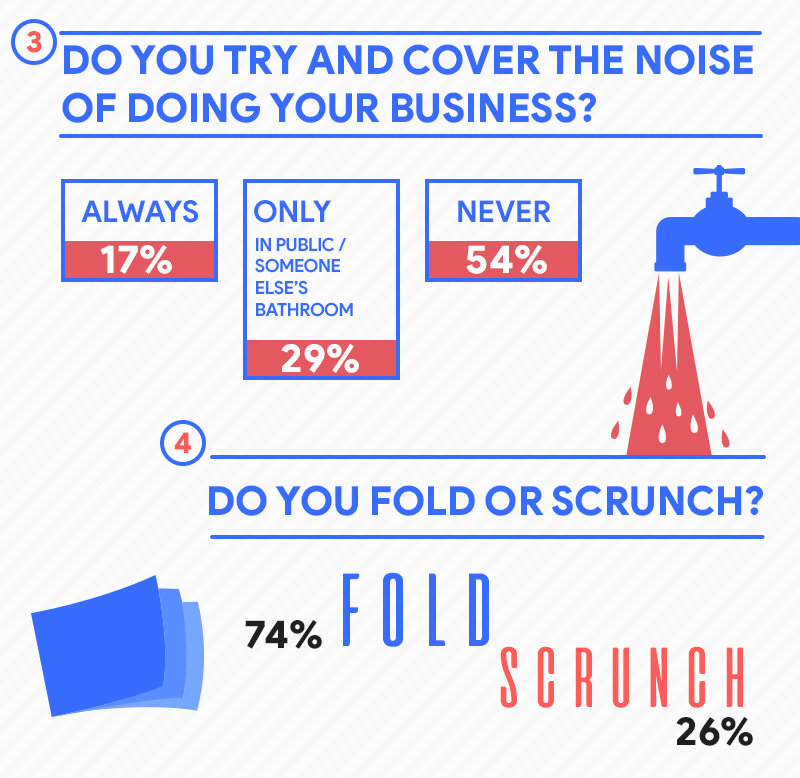 Often, us Brits are regarded as a prudish nation. We’re usually embarrassed by the most natural act. But, no matter how flustered we get - when we’ve got to go, we’ve got to go. When it comes to doing the deed, 3 in 10 (29%) Brits admit to hiding the noise in public bathrooms or at someone else’s house. For those that aren’t in the know, here are some of the top tricks for sound-proofing your poo. Pre-business, you can run the tap or pad the bowl with toilet paper. Or mid-business, you can cough or flush the toilet at the same time. Whilst being prudish may be regarded as a bad thing, you can’t deny it has led to some ingenious toilet tactics.

Our survey results revealed that there’s 1/3 Brits (31%) who favour going against the grain, wiping back to front. This is fine if you’re a male. But for the 1/3 (33%) of women who claim to wipe back to front, this is a recipe for contracting a UTI.

According to Dr Luke Powles from Bupa UK “a woman’s urethra and anus are quite closely located, so it’s best practice to wipe from front to back.” Otherwise you could be “spreading faeces from the anus to the urethra. Spreading bacteria to the urethra can lead to a urinary tract infection.” 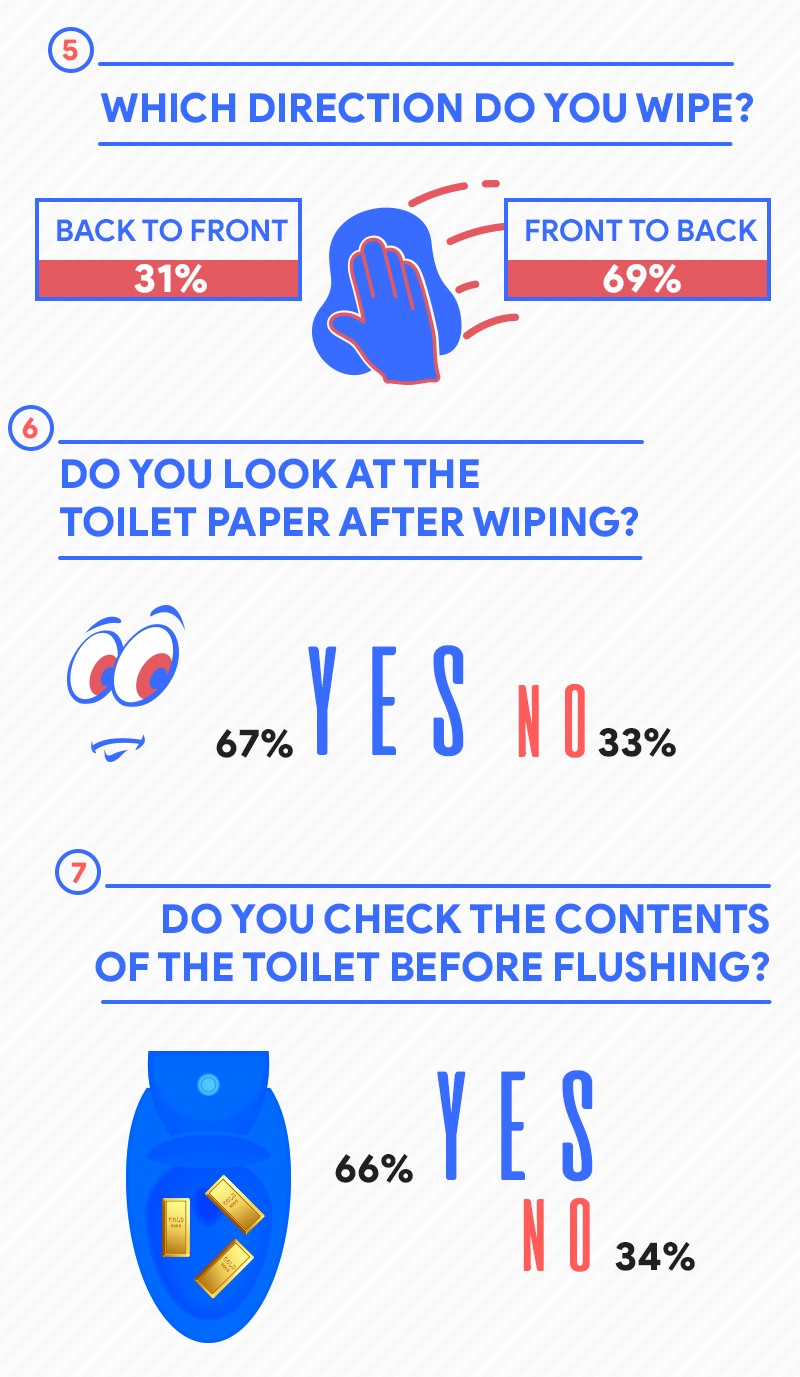 After you’ve used toilet paper, do you then inspect? Chances are you do, as our survey results revealed that 2/3 of Brits (67%) check their toilet roll after they’ve wiped. What's more, 2/3 (66%) of the UK go one step further and glimpse at the contents of the bowl before they flush.

The Benefits of Keeping an Eye on Your Bowels

For the remaining 1/3 of Brits (33%) that find it embarrassing inspecting their poo, rest assured - it’s actually a good habit to ensure your bowels are healthy.

So, what should you be looking out for? “Anything that’s more solid and difficult to pass suggests constipation, whereas a poo that’s more liquidy and passes really quickly indicates a lack of fibre in your diet or a period of illness,” reveals Dr Luke Powles.

If you do spot anything unusual like “the colour of your bowel movements being anything other than browny-green, and you’ve not eaten anything recently that’s an obvious cause of the colour change, this could be a sign of problems elsewhere in the body.” Always talk to a GP if you have concerns.

“If there are spontaneous, persistent changes in your stool, such as its consistency - how soft/hard it is -; the number of times that you go to the toilet or if you see blood in your stool,” you should see a GP within two weeks.

While talking about your bowels may be embarrassing for some, if you do have problems they could be seriously detrimental if left too late. It’s never anything to be ashamed of, and a health professional will have lots of experience talking about these types of symptoms. 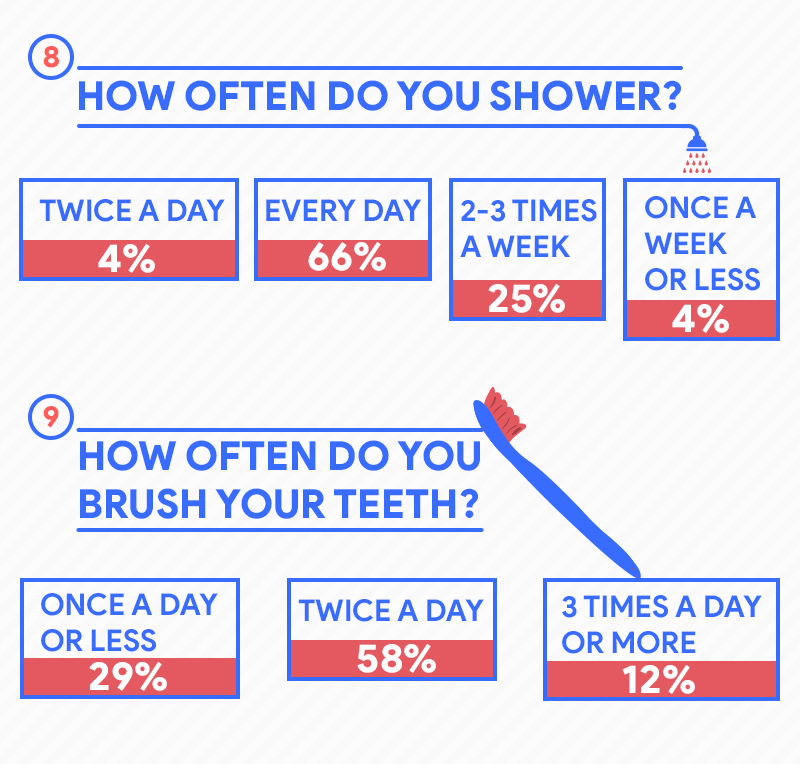 Most of us like to shower or bathe at least once a day – 2 in 3 (66%) Brits to be exact. However, according to dermatologists, we often shower too much which in turn, can strip the skin of natural oils. For those that feel the need to shower or bathe twice a day, this is unnecessary unless you work out daily or your job involves getting dirty.

However, what doctors do recommend doing on a daily basis is washing your hands. If you don’t wash your hands after every bathroom trip, “you’re putting yourself at extra risk of contracting and spreading germs that can lead to illnesses including Flu, Salmonella, E. coli, norovirus, adenovirus and hand-foot-mouth disease.”

Most Brits (90%) claim to wash their hands regularly, but the remaining (10%) admit they don’t wash their hands after every trip to the bathroom. That means that in an office of 40 people, at least 4 colleagues are likely not washing their hands after a trip to the loo. They’re passing on germs and bacteria to everything and everyone they touch. Dr Luke Powles advises that “just one gram of faeces can harbour one trillion germs.” Think about that the next time someone offers to make you a cuppa!

3 in 10 Brits Only Brush Their Teeth Once a Day

Naturally, the condition of our gums and teeth can be a good indicator of health. However, our research has uncovered that 29% of Brits only brush their teeth once a day - or sometimes, even less. Dental professionals recommend that we brush our teeth twice a day, but with only 2 in 3 (58%) of the British population doing this, it seems that some Brits could work on their dental hygiene.

So, there you have it, Britain has come clean on their bathroom habits. How do you compare? Are you the 1 in 3 that wipe back to front, or maybe you're part of the 29% that uses tricks to sound-proof their poo? Whichever way you behave in the lavatory, the most important thing is that you keep clean and healthy.

Flow rate is measured in litres per minute and is an indication of the performance of a product at different water pressures. The higher the flow rate, the more water is produced by the outlet per minute.