Many of us dream of living like a celebrity in their beautiful luxury homes. But have you ever wondered how long it would take for you to save for a house like theirs?

Luckily, we can give you a glimpse into the true cost of a glamorous lifestyle with our interactive tool. Just input your salary to uncover how long it would take for you to save for a 20% deposit on a series of celebrity homes, including Taylor Swift and the Beckhams, to name a few.

What’s more, as part of our research we have investigated how long it would take the average Brit to buy these celebrity homes, and how the average British home compares to lavish celebrities.

Read on to discover these findings in full.

House About That: How Long it Would Take to Buy These Celeb Homes

As part of our research, we have uncovered how long it would take the average Brit to save for a 20% deposit for various celebrity homes: 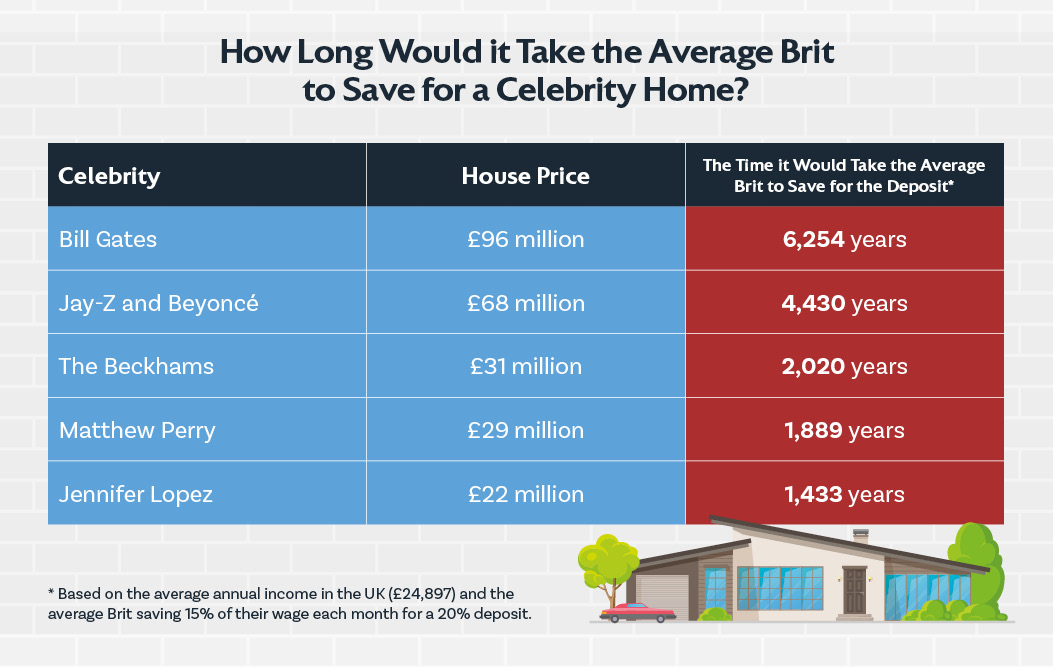 Comparatively, we’ve uncovered how quickly these celebrities could purchase the average home in the UK.

Not So Micro Earnings: In 13 Minutes, Bill Gates Could Buy the Average UK Home Outright

Our research found that Bill Gates owns one of the most expensive celebrity homes, costing a whopping £96 million. However, if you’ve ever dreamed of living in a home-like this – with its seven bedrooms, six kitchen and 24 bathrooms, you could be saving for a while…

Our findings have uncovered that if the average Brit saved 15% of their take-home pay each month, it would take them 6,254 years to save for a 20% house deposit alone. Yes, you read that right – over 6,000 years for a house deposit.

Comparatively, if Bill Gates wanted to buy the average priced UK home (£234,742), it would take him less than two minutes to save for the deposit, and just 13 minutes to buy it outright.

Or if Bill Gates were to invest his entire net worth into property, he could afford to purchase 362,099 average UK priced houses; that’s nearly the same amount of homes in the whole county of Derbyshire (361,860).

Jay-Z and Beyon-say-what? This Power Couple Could Purchase 532 UK Homes with Their Annual Earnings

The superstar couple, Jay-Z and Beyoncé, live in one of the most expensive celebrity homes in Bel-Air, costing them £68 million in 2017. Their beautiful home comprises six separate structures and four swimming pools to name just a few of the desirable features.

If these are the features you fancy in your own home, unfortunately, it’s unlikely to happen as it would take the average Brit 4,430 years to save for 20% of the house deposit.

However, if Beyoncé and Jay-Z wanted to purchase the average priced home in the UK, it would take them 16 hours in total. Considering, it takes the average couple three-and-a-half years to save for a house deposit, this stark contrast of two-thirds of a day is quite the difference.

What’s more, this power couple’s combined earnings amounted to £125 million in 2019 – equating to £14,308 per hour, or £343,392 per day. With these monumental figures in mind, their annual earnings could purchase them 532 average UK homes outright.

Posh and Bricks: It Would Take the Average Brit 2,020 Years to Save for a Deposit for the Beckham Home

While David and Victoria Beckham have lived around the world for many years, they decided to settle down in the UK in 2014. But who could blame them when their lavish £31 million home in Holland Park, London, has five floors, six bedrooms and bathrooms, and even an air-conditioned garden?

So, bet you’re wondering how long it would take for the average Brit to buy a home like the Beckham’s? Well, considering the average salary in the UK is £24,897, it would take the ordinary Brit 2,020 years to save for this luxury home.

But even these figures don’t highlight their extreme height of wealth; if they wanted to sell their £31 million home in Kensington, they would have enough money in the bank to purchase 132 average-priced homes in the UK.

No Longer Jenny on the Block: J-Lo could Purchase 1,325 Homes With her Net Worth

Well, she didn’t lie in her song; she still is Jenny from the block, but the difference is that she could now buy it. In fact, she could buy the full neighbourhood with a net worth of £311 million.

This staggering amount of money is enough to purchase 1,325 average UK homes – if she ever wanted to trade in her mansion, complete with its infinity pool, in Los Angeles.

Alternatively, if you were interested in uncovering how long it would take to put down a 20% deposit on her home – you’d have to dig deep into your purse. It would take the average paid Brit 1,433 years.

The True Cost of Being a Real House(wife) of Cheshire

However, as they both came from nothing and built up their businesses themselves, it’s inspiring to know that owning a house like Warford Hall is possible. For the average paid Brit, it will, however, take 945 years to save for a 20% deposit.

The Bigger, the Better: How Does the Average Home Compare to Celebrities?

As part of our research, we have uncovered how the average British home compares to lavish celebrities. 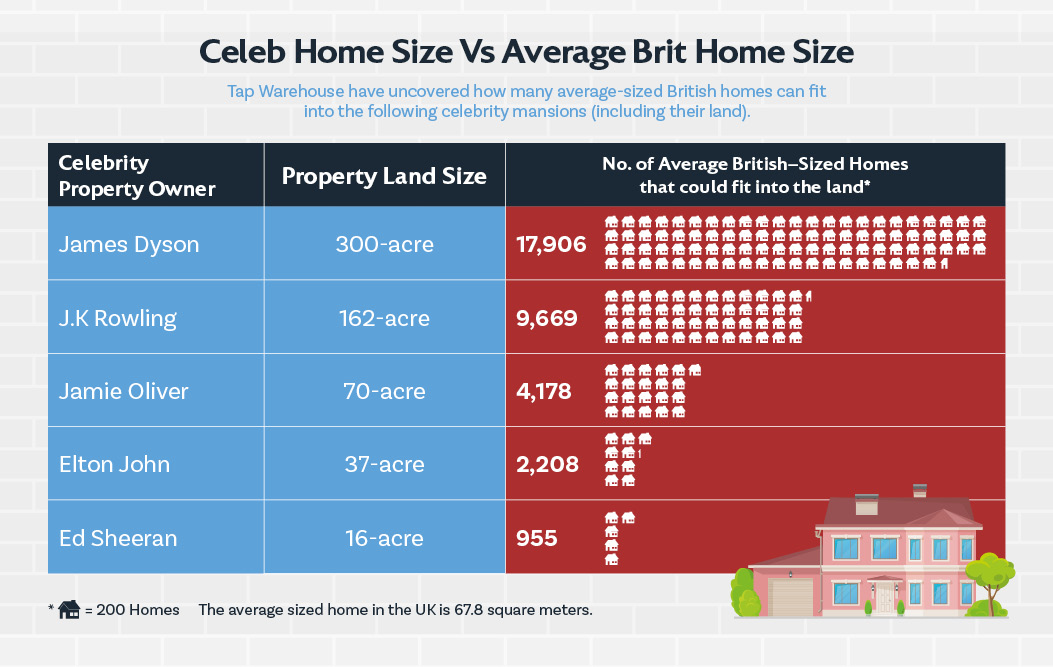 Who would have thought a vacuum cleaner could make you so ludicrously rich that you could afford a £20 million mega-mansion? James Dyson, the founder of Dyson vacuum cleaners, owns a huge estate, encompassing 300 acres of land. In fact, his estate is so massive that it could fit a whopping 17,906 average-sized homes on his land - making it three times as big as Vatican City.

What’s more, James Dyson’s mansion has an astonishing 51 bedrooms, which is 17 times more than the average British house.

J.K Rowling lives in a beautiful 18th-century mansion in the Scottish countryside. Her estate comprises of 162-acres, which is bigger than Disneyland Park in California (160 acres). Her Scottish estate is so large that it could be the location of 9,669 average-sized British homes. The mansion includes two halls, a morning room, a drawing room and seven bedrooms, as well as a nod to her literature with Hagrid’s hut on the estate.

Jamie Oliver’s Estate is as Large as Grand Central Station

The famous chef shares a country mansion with his wife and family. The Oliver home is located on a 70-acre estate, which is enough land to fit 4,178 average sized UK homes. Comparatively, it is even as large as Grand Central Station in New York which is no surprise when you consider that the lavish home is large enough to feature seven bedrooms, 10 bathrooms, a swimming pool and an indoor treehouse.

Elton John owns numerous property, once of which is a Windsor estate, or as he calls it “the hub”. It has five reception rooms, a squash court, a romantic garden, and is home to thirteen dogs. But that’s not the only large number relevant to this house.

His Windsor estate is so large it could fit a whopping 2,208 average-sized UK homes on-site.

Ed Sheeran’s sprawling estate consists of two farmhouses, a mancave, a pub, a billiards building and a treehouse to name a few of the buildings – but did you know that his estate is so big it could home 955 average-sized UK homes?

But buying such property comes with an expensive price tag – the estate cost a cool £3.7 million.

So, now you know how the average Brit’s wage and home compares to celebrities. But if you want to discover how you weigh against celeb properties – why not try our interactive tool?

Tap Warehouse calculated the length of time it would take for Brits to save for a 20% deposit on a range of celebrity homes. This is based on Brits saving 15% of their monthly wage - of which is the UK’s average annual salary (£24,897).