Who would’ve thought that the world of kitchen taps could be so overwhelming? There are so many options to choose from, it’s difficult to know where to start, especially when you’re trying to find the perfect kitchen taps on a budget. Not only do your new taps have to complement your kitchen design, they also need to be functional and affordable. 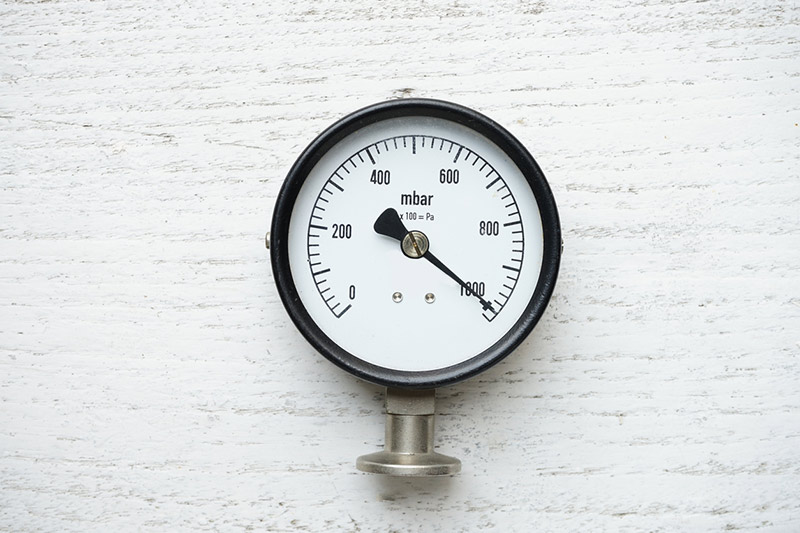 Something you definitely need to consider before purchasing new kitchen taps is the water pressure. Is yours sufficient for the taps you want? There would be nothing worse than finding those perfect kitchen taps and purchasing them only to discover they can’t do the job you want them to do.

The measurement unit of water pressure is called a bar. If you’re looking at a high-pressure tap, you’ll generally need 1.0 bar and up. On the other hand, a low-pressure tap only needs 0.2 bar. Other professional taps, such as a pull-out spray tap tend to require 1.5 bar pressure and above. If in doubt, there are hundreds of low-pressure kitchen taps out there that are just as stylish and practical. We’ve even got our own dedicated low-pressure kitchen mixers category to make things easy for you – check it out here.

How Flexible is the Kitchen Tap?

Tap flexibility also matters. An example of a tap that’s more flexible is a swivel spout tap, as this allows you to quickly switch between the two bowls of a kitchen sink. Pull-out spray tap have grown massively in popularity these last few years thanks to their brilliance at washing down pots and pans.

As silly as it sounds, many people don’t actually consider the practical side when choosing a new kitchen tap design. It’s essential to think about whether the tap’s spout will reach far enough into your sink. There isn’t a standard tap spout reach; so you must consider the positioning of the tap hole as well before making the final decision on your tap design.

Without further ado, here are our Top 10 kitchen taps all affordably priced under £75. After all, doing up your kitchen completely or just replacing a dripping mixer doesn’t have to break the bank.

One budget kitchen tap that has a great design and is one of the most popular at Tap Warehouse is the Vellamo Hero Kitchen Mixer Tap.

Not only is this polished chrome tap aesthetically pleasing, it’s functional, practical and suits your everyday needs perfectly.

The soft curves, swivel spout, and the long-life ceramic disc cartridges make it the perfect kitchen tap to wash glasses, soak pots and last a lifetime.

This gorgeous budget tap certainly doesn't skimp out on the quality, and boasts a durable brass body with some truly fantastic features - you can be sure of the Vellamo Hero's stellar quality. Contemporary style with great features and some seriously good quality parts, we'll take ten please!

With an easy to use twin lever design, and highly comforting 10 year manufacturer's guarantee what more could you need from a kitchen mixer tap?

The Vellamo FlexiSpray Kitchen Tap is another affordable tap for the kitchen.

This modern kitchen tap design with a movable multi-function spray is both practical and super useful for family kitchens with a lot of kid-related traffic.

Boasting a multi-function nozzle that is attached to a braided hose, it's no challenge to see why this beautiful swivel spout tap is so easy to move.

With two nozzle functions, you’ll be able to wash up quickly without turning your kitchen counter into a swamp. What's not to love about having a tap that makes your kitchen look like a full-on professional kitchen?

If you’re looking for a more traditional style tap for your kitchen, look no further than the Butler & Rose Elizabeth.

Whether you’ve got a traditional-style kitchen or you’re planning on designing a new kitchen with traditional features, the Butler & Rose Elizabeth tap handles is ideal.

Boasting a sleek polished chrome plated finish and some fantastic features, you simply can't go wrong. The Elizabeth includes an aerator in the spout for a soft water flow whilst simultaneously saving you money on your water bill, a swivel spout to allow maximum movement capabilities, and a very comforting 10 year manufacturer's guarantee to assure you of its awe-inspiring quality.

Brushed steel and kitchen taps is a match made in interior design heaven. Who are we kidding, the overall design of the tap is just as important as its functionality, and this sleek design looks fabulous in any kitchen design.

If you’re looking for a tap that will last the distance, stainless steel taps like the Vellamo Revolve Brushed Steel Tap is always a good affordable tap choice.

Not only are stainless steel kitchen taps more hygienic than any other metals, but they’re also more robust.

The ceramic disc cartridges of the Revolve help to control water flow whilst providing a watertight seal, which means no more annoying drips keeping you up in the night.

Suitable for low pressure systems with a minimum of 0.5bar required, nobody has to miss out on the opportunity of having this true beauty in their home.

Just because we are looking at cheap kitchen taps, doesn't mean they have to be boring, you can stand out from the crowd with the striking Coda Lever mono kitchen mixer tap from Sagittarius. This kitchen mixer is finished in a modern black colour, one of the most stylish trends in bathroom design.

The black finish is complimented by the simple clean lines and stylish thin handles which together create a tap which will be a fantastic modern centrepiece for any kitchen.

The dual lever handles allow for easy control of water temperature and a ceramic disk cartridge is included to help prevent drips.

Despite it's low price, this kitchen mixer is built to last with a fantastic 10 year guarantee.

The name says it all. This elegant kitchen tap is the perfect tap for traditional kitchens.

Complete with ceramic lever handles, this traditional mixer tap is stylish and hard-wearing. The tap lever design lends to the tap’s longevity as well as the ceramic disc cartridges used inside the body.

Measuring a height of 344mm, the swivel spout adds bundles of practicality to a beautifully classic design. Much alike the Mayfair Vibe, you can more your spout out as much as you please, meaning those difficult-to-clean pots and pans are put in their place for once!

There's so much we love about this beautiful statement kitchen mixer tap, but we're especially thrilled about the aerated water flow for a splash-free sink as well as a lower water bill and of course that oh-so reassuring lifetime manufacturer's guarantee that keeps us happy knowing the Victoria is great quality.

The perfect design for your modern kitchen, the Premier Pullout Spray Mixer Tap suits all contemporary spaces whilst being extremely practical.

The retractable handset together with the dual function flexible spray means you’ll be able to clean even the most awkward of items. If this isn’t enough to convince you, the dual-function tap nozzle is.

All it takes is a simple push of a button on the tap’s nozzle to divert the water flow from a pressured tap water stream to a watering can spray.

This Premier beauty boasts ceramic disc technology meaning dripping taps will become a thing of the past in your household, a protective coil manufactured from steel for durability and a generally aesthetic look, alongside a very comforting 5 year manufacturer's guarantee.

To maximise the functionality of the Premier Pullout Spray Tap, you’ll need a water pressure level of between 1 and 5 bars.

There are so many things that make the Harbour Single Mono Lever Tap stand out.

A cost-effective tap, this sleek modern tap design is a great way to add a new element to your kitchen without having a total refurb. A user-friendly tap, its single lever makes getting the water temperature just right effortless.

As well as its seamless chrome finish design, you’ll also benefit from the latest in ceramic disc technology, so there’ll be no more struggling to turn the tap off properly and no more annoying drips.

This Harbour tap boasts a 360° swivel spout to allow maximum movement capabilities - you can switch from one bowl to the other at ease and keep everything sink-related as efficient as possible - what a treat!

If you're somehow not quite convinced by this beautiful tap's elegant design and fantastic list of features, perhaps the lifetime manufacturer's guarantee will make up your mind? That's total reassurance that the Harbour single lever kitchen mixer is the right choice for you, guaranteed.

A single lever pull out kitchen mixer, the Vellamo Savu, measuring 336mm in height is a modern tap that will suit any stylish contemporary kitchen.

Pleasing to look at with its elegant curvature, this chrome finish tap is simply stunning, making it a great little kitchen feature in itself. Simple to use, the pull out aerator works well with a 1.5 bowl or a 2-bowl sink.

If ever there were a minimalistic tap design for kitchens this would be it. But as well as looking amazing, it’s also highly practical with its single lever control, swivel spout, ceramic cartridges and ability to handle low-pressure water systems.

If you're not totally ecstatic with the aesthetic look and jaw-dropping features of the Savu, perhaps the totally reassuring lifetime manufacturer's guarantee will tip you over the edge? Just saying...

Last but not least, our final wonderful kitchen tap is the Harbour Stature.

With an impressive overall height of 412.4mm this minimalistic tap design is perfect for a busy modern kitchen.

You’ll be amazed at how much a single tap can transform a space, and the Harbour Stature mono mixer is certainly no exception!

The polished chrome finish makes it easy to clean and the swivel spout means it’s a true champion of cleaning pots and pans. With a minimum of 1 bar water pressure required, it’s compatible with most modern water systems around the country.

This gorgeous beacon of kitchen luxury boasts ceramic disc technology to prevent unwanted dripping, a swivel spout to allow the most useful movement abilities, an irresistible aesthetic design, and of course that oh-so-calming lifetime manufacturer's guarantee once again.  We really are spoiling you here!

The Short Of It / TLDR

When choosing a new kitchen tap, whether it’s a contemporary tap design or a more traditional one, keep a look out for the features that make the difference between a cheap kitchen tap and one that is built to last. Ceramic disc cartridges, solid brass construction and spout aerators are all signs of a good quality kitchen tap.

It’s not necessary to purchase expensive designer taps for your everyday requirements, but it is essential to check out the basics first. At Tap Warehouse, we have a range of beautifully designed kitchen taps, so if you’re still at a loss as to what to choose, contact one of our experts who’ll happily point you in the right direction.